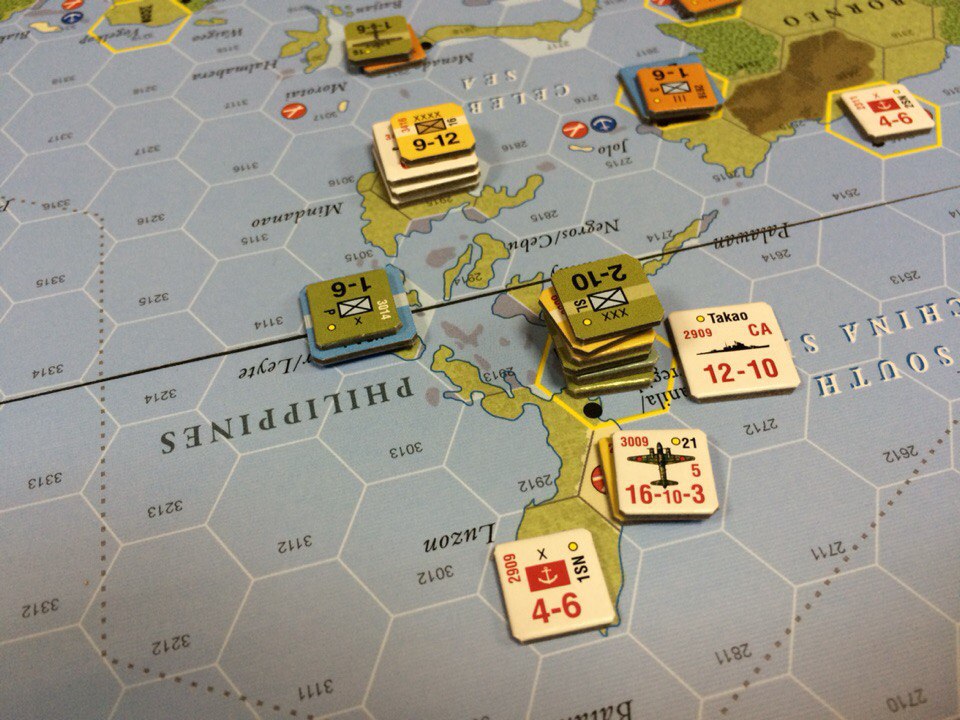 As we get Second Edition of the EotS, we decided to try it as soon as possible. So, we’ve chosen 1942 scenario, as Operation Z could be very frustrating for the unprepared players. I’ve got Japanese and Pavel got Allies. 1942 Set-Up incorporates the consequences of Pearl-Harbor attack. Carrier task force with Lady Lex and Enterprise returned to Hawaii, Japanese armies already invaded Philippines, Borneo, Malaya and Siam. On my first turn I’m playing US Inter-Service Rivalry, so Pavel cannot activate all of his Oahu units until he discards 3 OPS. This helped me much. US Task Force consisted of carrier Lexington, Enterprise and also cruiser New Orleans attacks Japanese Marshall Is. sea base guarded by 24th Air Flotilla 4SN brigade and light cruiser Tenyru. Thanks to great intelligence services, Japanese were able to intercept the attack and confront it with own carrier force. The result of the battle would become a long nightmare for the US. Just look what’s left from task force: After this “contrariwise Midway”, Tojo had in mind invasion to Oahu, overkilling what’s left of it’s defenders. But remembering the historical outcome of such intensions he decided to finish the Phillipines invasion. Successful intercept by McArthur didn’t help to the allied forces on Phillipines, and Manila fell shortly. I’d like to mention, that I had an excellent hand on the Turn 2: three good Military Cards, two Reaction cards. I even used 3 Japanese Air Replacement card as 3 OC. Trying to keep up with historical schedule, Japanese pressed Kuantan and Singapore in Malaya: As it seems, a lot of 1942 Scenario victory points are lying down in India. Five hexes of Northern India gives 1 point each (+2 if all are controlled), India Unstable box success gives 1 point. So it was decided to start massive assault in the heart of Northern India. Unfortunately, Allied intercept allowed to bring a lot of Commonwealth infantry near Rangoon. Air/Naval combat was undecisive, so everything was at stake in the land battle. Two Japanese armies goes to the Dead Pile reducing only couple of Indian divisions. That location will be soon known as Burmese meatgrinder. After the first turn (Game Turn 2), situation looked like. No US Naval units, so it’s -2 to US Political Will. Second turn (GT3) passed very quickly, as both of us played a lot of events. Allies reinforced their armies all over the map, though one US corps went to Europe. The stage was set for the last game turn.

The presence of Allies on CBI theatre was scary, so Japanese brought a couple units there for just holding up. Second Japanese carrier task force was near just in case. US Chief of Staff decided to destroy this covering force at any cost, so American planes started to bomb it attack after attack with mixed success. The fun began when repaired Yamato was brought here by Yamamoto to reinforce the defenders. Another sortie by 7 US Air Force units ran against the intercept. Americans rolls 0.25 and out of 2 strength points to reduce Yamato (Defence 18), so all other reduced units stays unaffected. Japanese retaliate with die roll 9, which leads to critical hit of overall strength 50 and 5 US step losses. Let us return to Burmanese meatgrinder. Japanese wanted to defend Thailand badly, so reduced army advanced to Bangkok. Indians stroke hard with two Corps and Division, supported by Air Force. Japanese intercept allowed to equal the odds with another Army unit and some planes. The battle was so engrossing that all ground units on both sides were destroyed (both players got x2 multiplier thanks to 9 die roll). At the end of the scenario, Japanese cut off Townsville from Oahu to get the winning 5 VP. Australian mandates gave another one point. All of that with addition of Political Will status gave 10 VP to Japanese with Decisive Victory. I’d like to mention, that without Townsville component that was very fragile to hold, it was only 5 VP and Tactical Allied victory.