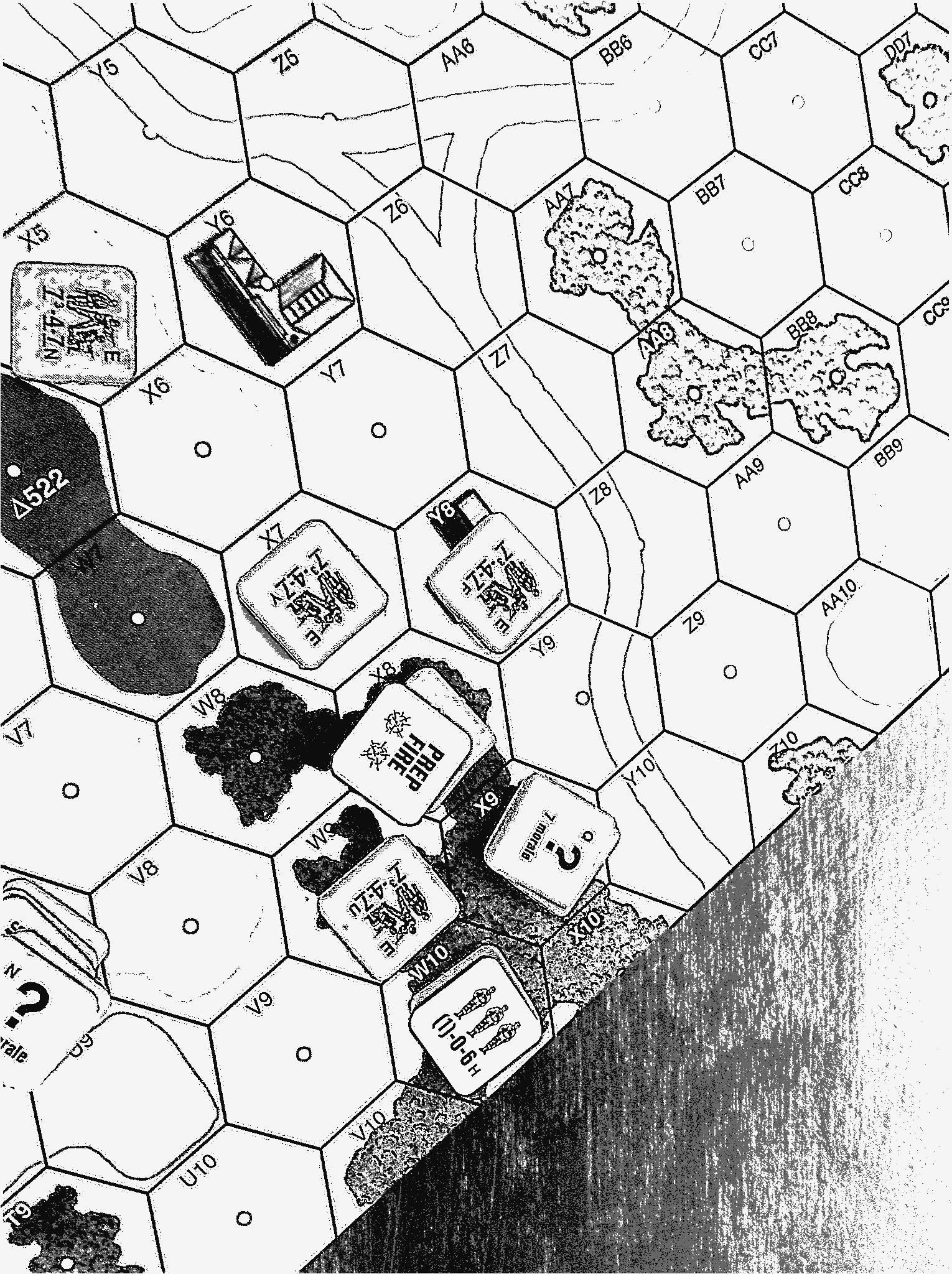 Described events took place in the August of 1944. Three infantry divisions of the VIII corps advanced to Brest to assault this important port. Here’s the setup:

Americans need to capture at least 15 buildings west of the blue line and not to lose 9 CVP. Green line shows the minimum required advancement frontier for the Americans. Orange line is the place for launching attack, so it’s highly desirable to get there in the first turn, to make an effective prep fire in the second one. The Germans plan is to slowly withdraw line by line, holding their positions wherever it’s possible, trading buildings for time. This time, Americans spent a lot of time on prep fire, so several units advanced only two rows west of the blue line.

On the April, 26th 1945, German 9th Army was trapped and encircled between the two soviet fronts. General Busse ordered a breakout to the west with the goal of reaching the Western Allies. To achieve this goal his battlegroups had to take the valley town of Baruth and use its road, since the remainder of the valley was useless for tanks. Anticipating this move, the Russians had placed the 50th Guards Rifle Division and dug in Stalin tanks to hold vital town. Germans need to exit 33 VP from the opposite side of the map. The first problem for the attacker is bog die roll for every hex tank (besides hill hexes) entered during its movement. Second problem: road secured by 122mm IS-2 tanks, which easily kills Jagdpanzers even with frontal hits and have 50/50 against Panthers. The firefight took place during the pre-dawn darkness, there were additional aiming difficulties. German player decided to concentrate his efforts on the left flank, to have some cover for the infantry. The plan was to clear out hills from enemy infantry using tanks and then push the infantry in the breach. German infantry received a task to capture Green foothold in 2-3 turns and advance to the town from there. Soviets were overwhelmed on their right flank, so they started to move up reserves there. Two IS-2 tanks were regrouped to the north part of the city, to prevent German tanks from the breakthrough. The third IS-2 stayed in the south to secure the town entrance. The German attack resulted full clearance of the west hill, destroyed IS-2 and two immobilized German tanks, but they could use a road!

Thanks to the 5:2 tank odds, it wasn’t so hard to encircle left IS-2 tanks and kill them from the rear. On the last turn Germans exited 33 VP and won.