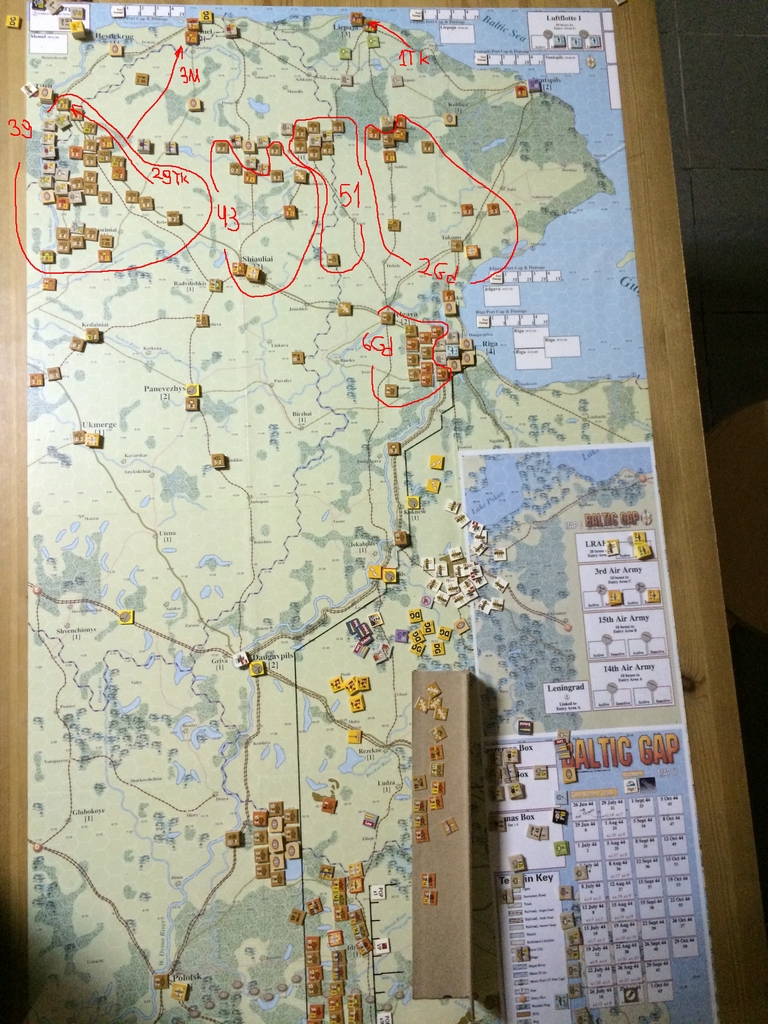 Sun is shining, the weather is sweet (c)… We won an initiative roll, but gave it to the opponent. Germans tried to connect with their enveloped forces between Rasseiniai and Keidainiai. Several armored units led by two-step panzer brigade made a hole in the outer circle. So, our 3rd Tank Corps became temporarly isolated and it is Soviet turn to punch a connection to the unsupplied units. Nevertheless, we rolled 11 on German attrition and killed the whole 4-step German division!

In the central sector Germans withdrawn to Telshiai and made a counterblow on our bridgehead near Mazheikiai. It was lucky for them! Our bridgehead was destroyed, and the river became guarded by German Panzerwaffe (not enough infantry for everything!). But in the Game of Encirclements we can play together! Our 39th Army enveloped the remnants of two German Panzer Divisions with it’s natural advancement. It cost us some nerves in the left part of that maneouvre. First of all, we tried to breakout with internal stock overrun made by infantry division. It just suicided after getting 6 column defender surprise. We were lucky in the second overrun comprised of another infantry division and assault guns battalion, as German panzer battalion was destroy in the process.

43rd Army aligned it’s positions with 39th before the offensive on Taurage-Tilsit. 51st Army settled near Mazheikiai to force Germans away from the river. 2nd Gd Army encircles Tukums and split it’s efforts between Liepaia and Ventspils. The weather is clear. Germans won the initiative and took it for sure. Another strike on 39th Army and the hole is punched again. This operation was conducted by kampfgruppe, separated from Gross Deutschland Division. Isolated Garrison of Tukums surrenders without a fight. Now it’s again our turn to envelope retreating German units on the left flank. So, the 39th Army once again formed the outer circle of envelopement. 2nd Gd Army forced Germans to guess, where the next strike would be blown. We also conducted several raids with very ambitious objectives.

1st Tank Corps jumped out of Mazheikiai and it’s units took the most important railroad stations and bridges near Memel and Liepaia upon which German supply network relies very much. The main blow was made on Taurage, where German HQ should be located. 3rd Mech Corps and 29th Tank Corps made an attacks consequently, and the latter became a fatal for Taurage defenders. To make a coup de grace on German supply infrastructure, we brought a Gd motorcycle Bn to the bridgehead against the Neman River. As you know, it’s forbidden to make an overrun attack across the major river, so the German chance to survive will rely on the assault from the inside… Only one turn left! This turn was almost as dramatic as previous turns alltogether. I cannot remember much die rolls less than 8 on that turn, so it was very bloody. So it started with German weather roll of 6 and initiative roll of 10. We answered with humble 8, so Germans got a chance to save some units from pretty blue out-of-supply markers. Germans had only 4 Tokens in their area of operations. They fueled two kampfgruppes separated from two panzer divisions and made an overrun attacks using internal stock to open at least some trace supply routes. Strike in the direction 1 opened up trace supply from Memel port. Strike in the direction 2 opened a road to the East Prussia, so it became possible to use Konigsberg supply dump. Strike in the direction 3 punched a hole in the Neman Pocket, so it became possible to bring the some fuel. Several panzer units were fueled and tried to escape the pocket.

Now it’s our turn to act! Looking at the map, we’ve marked three ambitious operational goals for that turn: capturing of Memel and Liepaia ports and taking back Neman-Tilsit bridgehead. So, we fired 3rd Mech Corps to the Memel led by independent Guard Tank Bde. Liepaia was assaulted by the tank brigade and AG battalion from the 1st Tank Corps. Both targets were successfully pretreated with air barrages and both garrisons were disorganized and then destroyed. Neman bridgehead was barraged by soviet artillery division with strength 90 (Art Ammo was very handy there). Do you remember how Soviet artillery acted throughout the game? It made no difference there, so the infantry brigade was destroyed in the barrage. Only disorganized Tigers battalion left. We already destroyed one some time agom so we weren’t afraid of this one. 29th Tank Corps rushed to the target in combat mode with it’s two tank brigades multiplied by 1.5 and infantry brigade and AT brigade. There was no surprise in the attack and devastating DL1 result was achieved!

You may see the final positions of our armies on the last photo. Only 4th Shock Army was stuck far away from the frontline, but this exchange was in our favor. We’ve got victory point on every turn, so there were 16 of them!

In the end, I hope you liked the story. I would highly recommend OCS games to every wargamer, because it feels and plays different. Once you hooked up, there’s no way back!