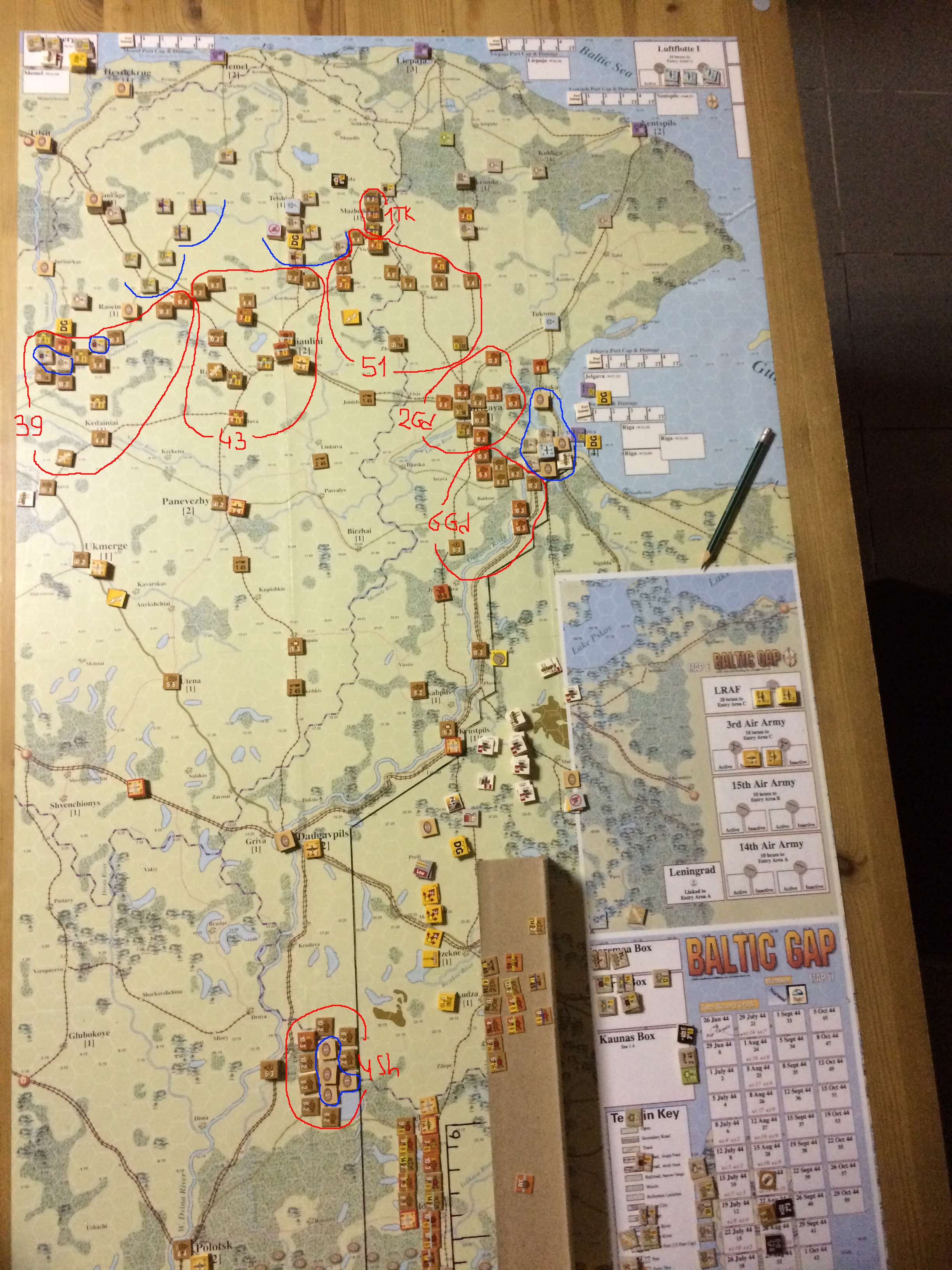 Igor: That turn promised to be a calm one without any hard decisions. As Dima was out of the city, we decided to play one turn without him. As the saying goes, “there were no signs of anything bad”. The German turn met expectations and used to be very calm. Germans continued their systematic withdraw. I decided to aggravate the situation before executing attacking plans on Soviet turn. In Reaction Phase I advanced two mechanized brigades of the 3rd Mech Corps with the loaded organic trucks to the west of Shiauliai in Move Mode. This maneuvre allowed me to attack victory hex Telshiai (1725) in Combat Mode during my Turn. I wasn’t afraid of German Panzer Divisions counterattack, as I thought they would be afraid of encirclement on my turn. The reality cruelly intervened in my calculations. Not only both of my brigades were destroyed by attack of 12th Panzer Division during Exploitation Phase. My later counterattacked resulted in loss of 4 more tank brigades from different Tank Corps.

Despite the fact I thought my attacks had a good “safety margin”, don’t forget about surprise roll (that’s why we fanatically loves OCS). That day became the glorious one for German Panzerwaffe that secured East Prussia for a long time. I’ve returned to take part in the next turn. We won an initiative roll and gave it to the Germans, as we had no place to hurry right now. We still has no safe positions in the Shiauliai. More than that, one mech brigade of 3rd Mech Corps became isolated and should be rescued on our Turn. Germans withdrawed their 12th Panzer out of troubles, but there are a lot of Panzer units near Shiauliai, 7th Panzer and SvGZ are amongst them.

Our mission for this turn is to continue the infantry pressure all over the front and rescue our comrades from 3rd Mech. There’s a weak spot in the mech brigade encirclement – artillery regiment with captured trucks. So we fueled one tank brigade, made a successful overrun there and help mech brigade to escape. We also took Kelme this turn (it will be visible on the photo of 10th turn).

Unfortunately, Kaunas event happened this turn. German Panzer Corps will arrive next turn and our Gd Tank Army will arrive on the third turn (15th of the August). Thanks to our adventure in Kelme (village on the Shiauliai-Riga highway) we forced 7th Panzer to withdraw and not be cut. So the Germans should start everything from the scratch! We reinforced our tank brigade with infantry division there. Germans fueled Grossdeutschland and drove them to confront our outpost.

Arrived Panzer Corps makes no much difference there – just try to fuel five Panzer Divisions simultaneously for 5 SP and then make some attacks with them at least 1 SP each. Though, besides Panzer Corps, Germans got some airplanes.

Our airfield in Shiauliai was supressed, front units were successfully bombarded by no German attacks were made.

Our infantry pace allowed us to completely encircle Jelgava and approach Riga close enough to start the assault. Shiauliai itself has reasonable defences now, also thanks to infantry. The last problem that slows us down in Koknese town encircled in our rear. That what I call a calm turn or operational pause. We gave up the initiative and Germans found themselves with nothing to do, but accumulate some supply. We stormed Koknese with three infantry divisions and took it at last with comfortable DL2o2 result. Now 6th Gd Army freed to make some haste to the Riga. As for Jelgava, we decided to postpone the assault, though artillery barrage killed one step there. Once again we giving up the initiative thanks to our positive cadence. Germans fueled up two Panzer divisions. One to plug some holes on the left flank of our offensive, the second one to kill the bulge created by our advanced infantry division from 43rd Army. We’ve got the 5th Guard Tank Army consisted of two Tank Corps and some independent mechanized units. We cannot continue our offensive on the left flank, as th 39th Army will be vulnerable in the open once it crossed the river. We made another deep operation with fresh 3rd Tank Corps, trying to encircle 7th Panzer Division there. 43rd and 51st Armies made Shiauliai the safest place ever and force Germans to withdraw further west or north into Courland pocket.

We planned two “dashing cavalry” attacks this turn: 1st Tank Corps should strike on Mazheikiai supported by air bombardment; one tank brigade should overrun Sloka, so exploting tank battalion could cut Riga from the Baltic Sea. Unfortunately the latter maneuver failed, without casualties though. But Mazheikiai was taken.

If we win initiative next turn, we may cut all Prussian German flank from trace supply. Just check the previous photo more carefully and you will know how eager we were to win the initiative. It would make the final blow to the half of the German forces and the other half would find themselves trying to escape to Courland Peninsula. The weather is Limited with die roll one. I’m rolling for the initiative and get 9! Germans rolls and got 11! Ok, we will solve more complicated situation! So we started our turn. First of all, it’s not easy to play encirclement games with the Soviets. We just swallowed 7th Panzer Division with our 39th Army and deblockaded 3rd Tanks Corps. 43rd and 51st Armies continued further west to the Memel and Liepaja. 2nd Guard Army took Jelgava and opened up the important highway for supply needs.

The most funniest things happened in the Barrage Segments. Two reduced bomber units with combined strength 8 rolled 6-6-6 against German tanks near Mezheikiai killing one infantry brigade and disorganizing tank battalion. We will destroy that battalion in Combat Phase and capture the important hex. Second sortie destroyed tank battalion from 5th Panzer “for free” and artillery barrage killed one step in Jelgava making our assault two times easier.

22 POP points, another Victory Point and hard times for the Germans – these are results of our turn which started with some sad feelings and ended in total happiness.