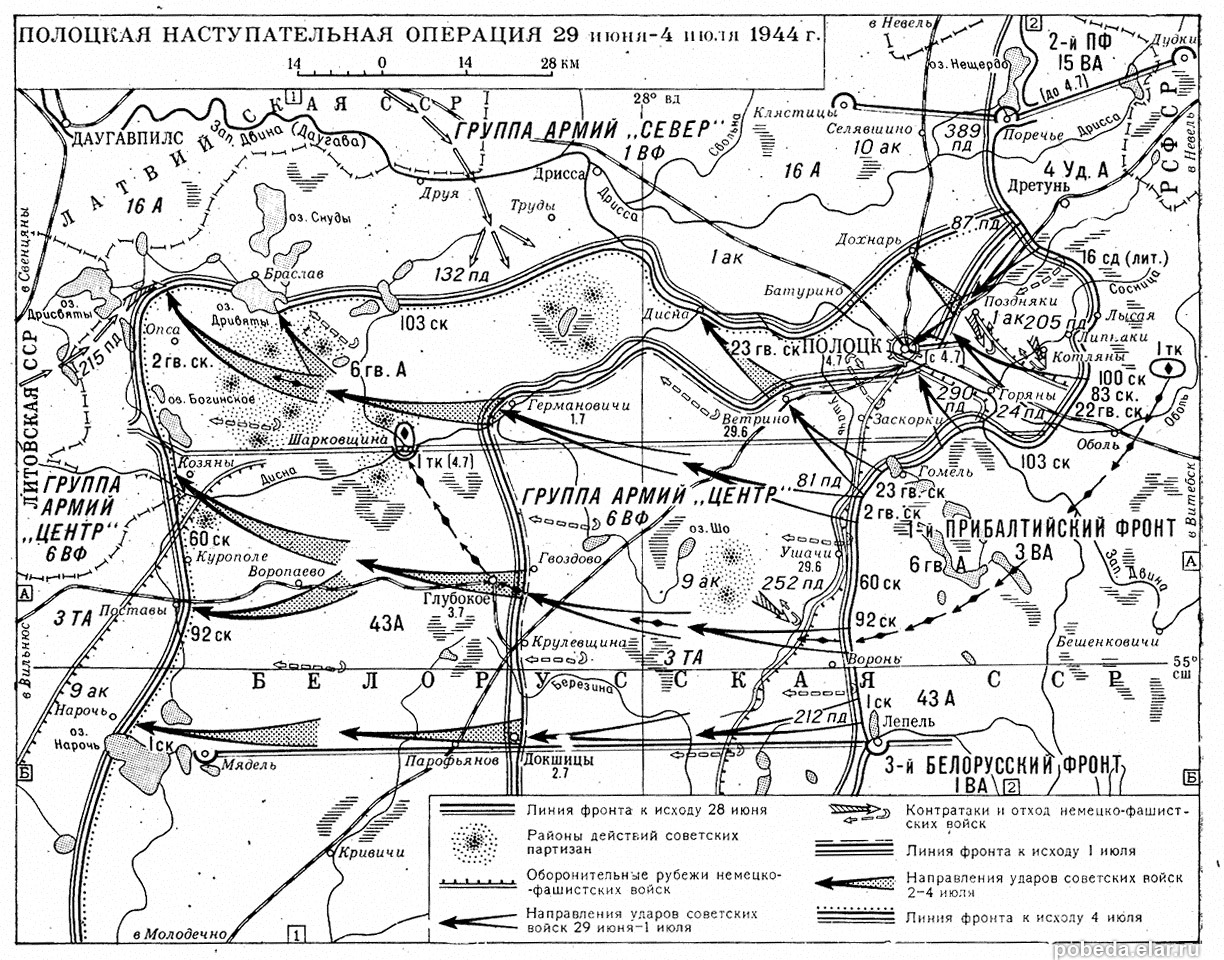 Recently I finished two OCS Baltic Gap games in Polotsk mini-scenario with a new OCS player. He had a little OCS background before – several Kasserine Pass training sessions. This time he wanted to participate in the Eastern Front operations, so it was easy to choose one of my favourite games – Baltic Gap. I would like to thank John Kisner for the great entry-level Polotsk scenario that he published later in the Gamers Archive.

This AAR will be dedicated to our first play, where I commanded Soviet forces and opponent took Germans, as Axis has less units to manage which is critical for the new player.

The game begins on the 26th of June, 1944 on the outskirts of Polotsk. Polotsk is the very important transport junction that should be captured by Soviets if they are eager to advance farther in the Baltic States towards East Prussia. I and X German Corps are opposed by the 6th Guards and 4th Shock armies. On the first time, there’s also 43rd Army coming from the east, a little south of the 6th Guards. 43rd Army could be used either for the Polotsk encirclement or thrust towards Glubokoe. This should be decided by the Soviet commander, the sooner, the better.

Victory points acquisition principles are took from the campaign rules. Soviet should act ahead of the population centers capture schedule to get some VPs. Germans got VPs if Soviets falling behind the schedule, and there’s no VP in case of exact schedule accordance. You may find all the POP centers in the blue rectangles on the map above. The scenario has the following schedule for its four turns: 0, 0, 2, 4. So, the Soviets has an opportunity to grab their first point on the first turn by taking Glubokoe. And to the third turn they should have Polotsk, Glubokoe and Shvenchionys. There’s also 18.11 hex that will give 1 VP to the Soviets if the capture it to the end of the game.

So, the German setup is received, it’s time to start the most interesting part of the game – the planning. My plan was simple enough – strike along the convergent railroads on the Polotsk with the 6th Guards and 4th Shock armies after the fierce artillery barrage. It is also wise to set in reserve the mobile units of both armies to exploit the possible breakthrough. Infantry divisions of the 43rd Army were sent to the Polotsk to seal its fate from the other side of the river. Tank brigades of the 43rd Army should thrust to Glubokoe and capture it with sudden strike. The attack should be supported by air strikes and air supply drops.

It’s crucial to immediatly use 5 wagons of the 43rd Army to create an extender of the supply source C, in other case it will not be able to advance forward swiftly.

Despite of the furios artillery barrage from the Soviet artillery breakthrough divisions, the Polotsk perimeter withstood. On the other hand, two guards tank brigades destroyed Glubokoe garrison and captured the village with 750 tons of supply there. Germans were  placed in the crisis situation from the very beginning.

The German attempt to counterattack the Glubokoe with just arrived IX Corps failed. The Nashorn battalion with support of the infantry attacked the 43rd Army support units and destroyed anti-tank and artillery brigades. Germans  won the initiative on the consequent turn and destroyed the rest of the support units (only two Guards tank brigades left in Glubokoe). The main mistake of the German command was inactivity in the Polotsk sector.

On the second Soviet turn, I decided not to attack with 4th Shock army and concentrated all of the available resources in the 6th Guards sector. That was a right decision as breakthrough was achieved there! German infantry division guarded the railroads was disintegrated  and Soviet tanks rushed towards the Polotsk through the gap. So it became possible to allocate 1st Tank Corps for the raid to Shvenchionys.

Germans again won the initiative on the turn 3, but it didn’t make any difference, as a huge part of the two army corps became out of supply. The last chances to hold Polotsk disappeared, so we decided to finish the game, change the sides and start over again. The second game will be described separately in the upcoming article. Stay tuned!