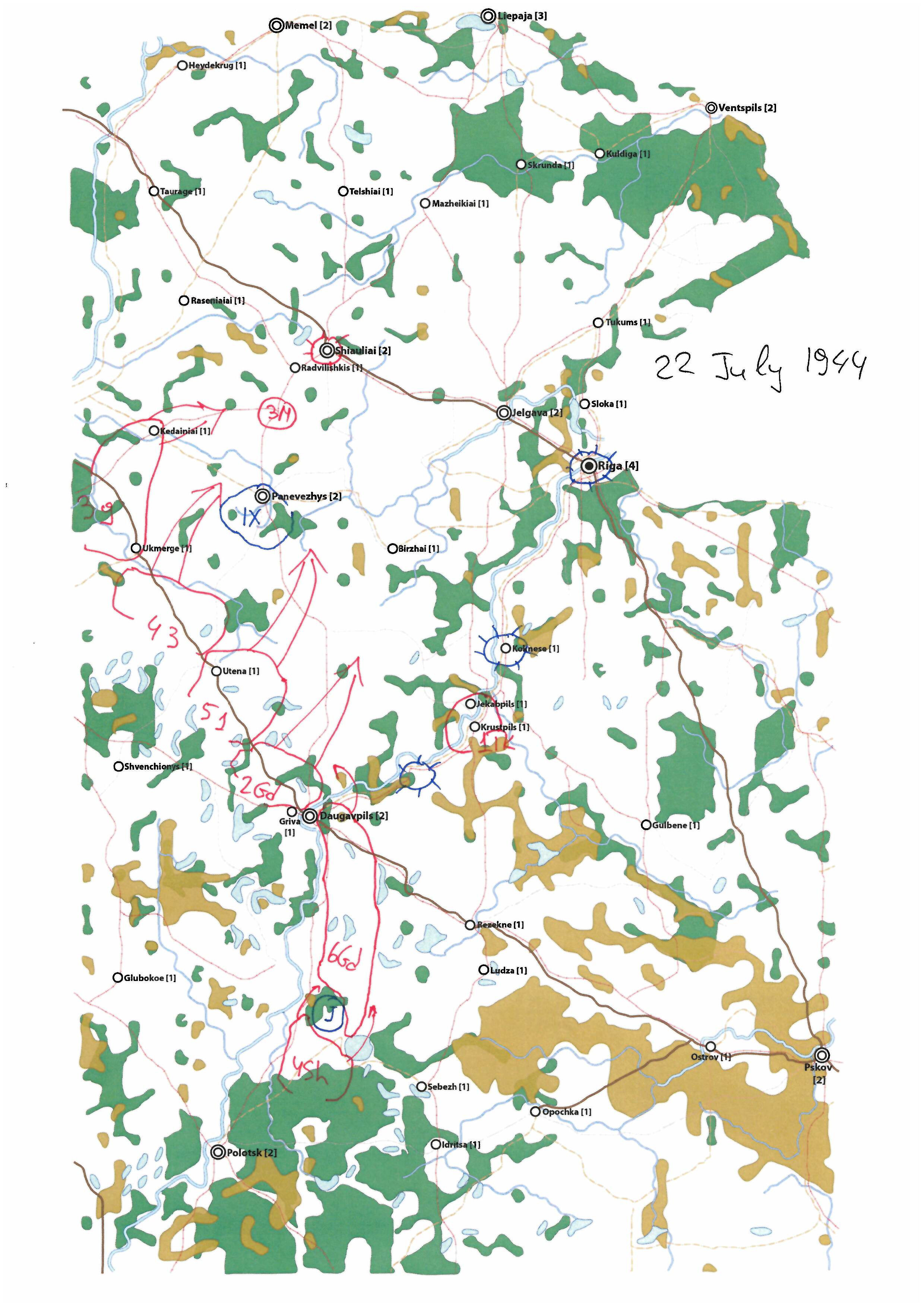 Right now, I’m participating in very rare occasion for our wargaming club – widescale Operational Combat Series game (Baltic Gap). Igor has chosen scenario 5.2 dedicated to the Soviet deep operation in the gap between German Army Group North and Army Group Center. Events of the scenario starts right after Polotsk Operation and represents Shiauliai Operation which goal was to defeat German Panevezhys-Shiauliai forces and advance to Riga having cutting German communication lines (AGN-East Prussia) in mind. I would like to thank my friend and teammate Igor for supporting my dry narration with his advanced comments (it’s not the last time you meet our teamwork!). We also developed some useful tools for operational planning. Igor created great order of battle form, so we’re tracking all of our units. I’ve drawn several schemes which allowed us to see a bigger picture. You’ll find our operational plans below.

Igor: A couple of words about the game. I would highly recommend Baltic Gap to the readers. This game is unique for several reasons. First of all, it’s the only available OCS game where we meet with Red Army “Second Edition”, in it’s Finest Hour – mood, propensity to heroic death (if Gotterdammerung means something for you), ability to solve hard operational issues while whistling something of Wagner. Secondly, despite the events of the game stays in the shadow of other Summer 1944 operations, they are very interesting per se. Add here playable non-monster scale of the game and density of counters, and it will shine as a bridge to the larger OCS games. I’m calling the scenario 5.2 “The Blitzkrieg Legend Light”. Even if there’s no formal resemblance, the course of action looks very similar.

Me: As I didn’t lost the events of the scenario from my memory, I’ll try to tell the story of our game from the very beginning. We created great Soviet Staff with Igor (teamplay made OCS for me much more exciting and valuable as gaming experience). Thanks Igor for great teamplay!

43rd Army strikes toward Svenchionis. 1st Tank Corps drives through the punched hole in the German front and takes Utena. 2nd Gd Army supports 1st Tank Corps and takes positions south of Daugavpils. 6th Gd creates a bridgehead over West Dvina river, striking with assault brigade, mechanized brigade and two infantry divisions against German ID. Idea of the attack is to cut German I Corps from the rest of the German forces. We also frozen in place four German infantry divisions thanks to air strikes. 4th Shock Army getting closer to I Corps and assigns 4 Gd IDs to the 6Gd using strategic movement.

Igor: You can see those re-assigned divisions under strat markers on the south bank of the West Dvina river. Bridgehead is guarded by only assault brigade. Division of “Katyushas” allowed us to kill German ID, as it had good chances to survive without that artillery step loss. That reminded us that nothing could be guaranteed in that game. IX Corps counterattacks out breakthrough with his two tank battalions (502 Tiger Bn and AG Bn), destroying our tank Bn and withdrawing to the west. XLIII Corps builds up some defences around Daugavpils. I Corps tried to destroy our bridgehead and escape the trap, but wasn’t lucky enough.

Igor: Unpleasant losses. I didn’t expect the German counterattack. Soviet can afford this losses, but German armor units set themselves in dangerous position away from infantry support.

Just remembered how we left those armor units as targets of the German strike: they allowed us to bring necessary supply to Utena. 43rd Army presses IX Corps to Ukmerge. 51st Army, 1st Mechanized Corps and 19th Tank Corps came from the south as reinforcements. We made an operational reserve from them. 2nd Gd prepared to hit towards Griva, but airstrike and artillery barrage failed, so it was decided to postpone the attack. 6Gd extended the bridgehead and cut IX Corps from the Daugavpils and Riga. 4th Shock Army pursuits the I Corps from the east to release 6Gd from encircling task. We also sent two tank brigades from 1st Tank Corps to capture ungarrisoned Krustpils and Jekabpils. Krustpils could become very handy with airfield 10 hexes from Daugavpils. We will supply these Bdes from air for a while.

Igor: Looks like we were lucky and won the initiative. Second turn in a row would permit Germans to infiltrate Soviet lines and move I Corps away from the trap. From the very beginning of the game, I waited for the moment when we win the initiative and give it to the opponent (which means, that everything goes fine for us and we hold the operational initiative), scaring him with our double move in the future. Not this time!

As 51st Army and two mobile corps appeared on the map, a question arose: “What to do?”. Although we knew the answer on other traditional russian question “Who is guilty?” – Joseph Stalin, of course! We decided to embed 51st Army between 43rd and 2nd Gd Armies. Such move allowed us to fill the gap and achieve maximum front coverage in the shortest time. As for mobile formation, we knew that we should move them on the very important occasions only, as gasoline is not infinite. By the way, we fueled them only two times each during the seven game turns. That’s the spirit of Deep Operation – throw the mobile unit behind the enemy lines, capture the key points and hold them before friendly infantry arrive. Igor: Panzer counterattack had no chances for success, as defenders supported by VVS were strong enough to reflect the strike. I would like to pay attention to one of the basic OCS principles: garrison everything. That understanding comes with experience, but our Utena and Krustpils raids are another proofs. You also can see German air units on the map. Many beginners doesn’t have a clear understanding of how-to use air forces. In this game, possibilities of Luftwaffe are limited with 1-2 good air barrages per turn (thanks to good stats and Safe Haven). Any attempts to base Luftwaffe on onmap airfields will lead to early disaster (as Soviet Guards Yak-9 will sweep anything in a moment). IX Corps takes postitions on the river near Ukmerge, everething else feels static.

Igor: Here’s the moment of truth! I don’t remember, did we lose the initiative or gave it ourselves, but things became easier. Possibility of double move is a great advantage (both operational and psychological). Igor: I would like to pay attention of the readers, that we found a way to move two mobile Corps on the maximum possible distance to the west from E point. Take a note of the 3rd Mech and 19th Tank Corps on the map. It’s also was the first time we constructed an airfield. Thank to this, our patrol zone coverage became almost optimal. It was time for 4th Shock Army to release precious 6th Gd’s divisions from the security task. 2nd Gd and 6th Gd finished encirclement of Daugavpils, killing all the supporting points around the city. 43rd Army aligned the front before Ukmerge, 51st Army moves on north-west axis towards Riga. 3rd Mech Corps cut the communication line between East Prussia and German forces by driving into Sheduva. It was pleasant surprise to have a 39th Army in reinforcements, that came west of IX Corps and threaten it with isolation. Tank Bde from the 39th Army takes Shiauliai.

Igor: It’s nice to see how western face of the I Corps encirclement changed from orange guards to khaki army. That’s 6th Gd divisions leaves to Daugavpils and 4th Shock intrude instead. And here’s the initiative mechanism in the action. It’s the finest hour of the 3rd Mech Corps, that cuts IX Corps out of supply by overrunning Sheduva. Once again garrison abscence made the difference. It’s also important to check the arrival schedule before the game. IX Corps tries to breakthrough the envelopment, but some of the units left without supply. I Corps and Festung Daugavpils left for attrition. Two German Pz Bns (Action Rating 4) counterstroke Soviet bridgehead near Ukmerge, but were repelled by 156th Underground Soviet Division (AR 1) on the clear terrain (surprise roll 1+1 – 6). German counterattacks Shiauliai with IX Corps with SvGZ Kampfgruppe supported by nebelwerfers. Shiauliai was defended by Soviet tank Bde and Pax of Latvian volunteers. Ao1 Do1 result kills 11 SS Bn and Soviet Tank Bde. Pax survives and holds the city. Klef forces still located near Krustpils, infantry divisions of I Corps changing each other to prevent our rail conversion towards Daugavpils. Igor: “Katyshas” again! The same units from 6th Gd Army. Advice to the future Soviet commanders: don’t underestimate the potential of the Soviet artillery. Thanks to John Kisner for great Arty Ammo rule. We were lucky with initiative roll once again and took it. This turn we wanted to align our fronts once again. There was only one planned attack – to separate Klef forces in Koknese from each other. This attack would allow us to leave Pz Bn and infantry division out of supply and isolate the rest forces and HQ out of the game. Nice airstrike destroyed German ID, so it was only AA Bn to attack – easy task for Gd ID and two Tank Bdes of 1st Tank Corps.

Igor: So it was. We concentrated our main efforts on consolidation of conquered space and preparing to meet German Panzer Divisions on map. I would also like to mention, that it was the second time we fueled 1st Tank Corps to consolidate it in one place north of Jekabpils. IX Corps tries to break away from 43rd Army to Jelgava. Cut Klef forces also moves towards Jelgava, but motorized infantry brigade from 1st Tk is waiting for them in the woods. During the attrition ID of Klef’s kampfgruppe loses 2 steps of 3. German Fw-190 tried to supress Soviet VVS in Panavezhys, but second Yak-9 saved the day, so Ju87 chosen not so important target (and lost 1 step due to Flak). As we prepared to meet any German menace, we gave up the initiative. 7 Pz Div went to Jurbarkas and 12th Pz Div to Kelme, so both of the divisions were located against out west flank (39th Army). Remnants of IX Corps continued to scatter towards Jelgava and Taurage. Second Ju87 attempt to bomb 32 Gd ID resulted suicide. All cut-off Klef forces surrenders due to attrition. Daugavpils once again suffers no attrition (those ugly 4 AR German units).

Igor: Once again we comfortably gave up the initiative to intercept it in the crucial moment. We redeployed our HQs and Extenders and tried to advance all of the armies forward at maximum speed. We also located on German ID in strategic mode near Shiauliai, so we easily destroyed it. Attack on Daugavpils resulted exchange 1 to 1. Still 3 steps left to kill. It was the first turn when we didn’t recieve the victory point (14 Pop captured and 14 Pop required).

Igor: The times of easy VP reaping passed. It’s time to tighten the belts. Daugavpils defenders has bought a lot of time to their comrades. We need to left minimum forces here and rush to Riga!