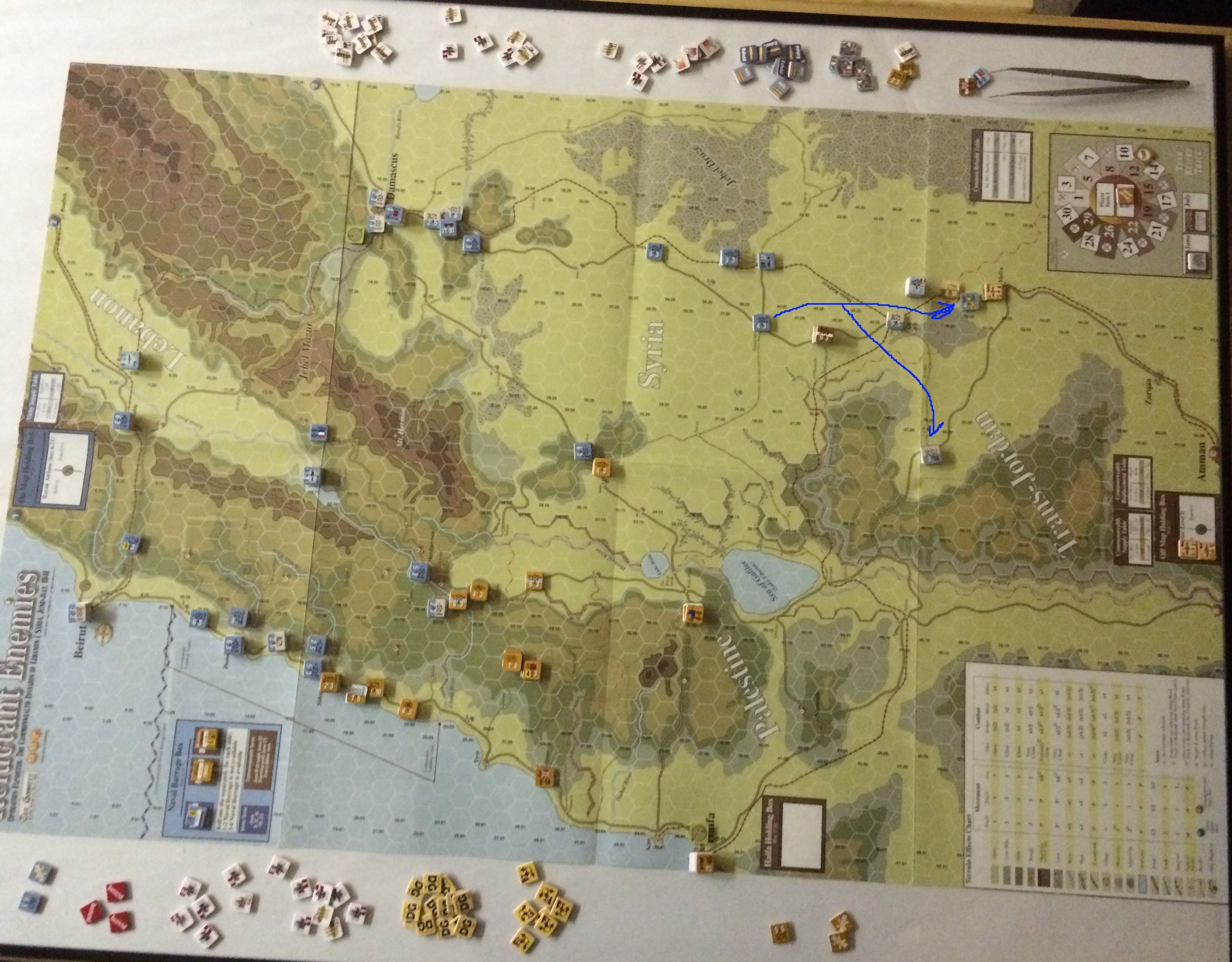 Recently I helped my friend to learn Operational Combat Series using great Reluctant Enemies game. My friend took British, as it’s much more interesting and diversely to play for attacking side there. You can also learn much more, when you need to capture some locations against the time. There’s not much options in the setup, here how it looked: British rushed to attack on all fronts from the very start. It’s smart enough to attack in many places, so the French wouldn’t plug all of the holes with their defensive units on British way to Beirut and Damascus. If I estimated it correctly, British spent 6-7 SP on their first turn for fueling and combat (for comparison, I spent 7 SP for the first turn artillery barrage not long ago, in Baltic Gap, scenario 5.3 Attrition Battle). Almost all attacks went successfully besides one. Three of them had 5-6 columns surprise and Barrage was successful with strength of 3-4 (that beginners luck!). Commandos landed not very aggressively, so they would be in trace supply on their next turn. One company died in beach assault though.

I spent my turn to plug some dangerous holes in French defensive positions to be prepared for meeting with 2nd wave of British assault. I won initiative on the second turn and gave up the right to move first. British attacks are not so lucky this time. My second turn also wasn’t very interesting one. Although, I succeded in evacuating of 3 SP “lava dump” to the Damascus! I will find the usage of those precious tokens for sure! British gave up the initiative on the Turn 3 to have an opportunity of double move in the future and exploit the success of “first” turn assault. French doesn’t has much to do in the beginning of the campaign. But I’ve found something! On my second turn I’ve noticed two lonely British HQs  on the Damascus flank and pulled tank and armored car battalions to the front. On my third turn, I’ve set them under Reserve marker and fired them up at Exploitation Phase. They killed both of the HQs and captured ~2.5 SP! British took initiative on their Turn 4 to rectify the situation. They cleaned up the highway on the Damascus flank and opened the trace supply there again to the forward units. British also had some success in the central part of the map, driving me out of the river position. This turn they made no attacks on the Haifa-Beirut highway. I had a feeling, that my friend lost some interest to the game after losing of two HQs (although, at my opinion is wasn’t a catastrophe, but a delay for a couple of turns. That couple of turns would also allow to accumulate some supply for the future offensive). So, I decided to make an all-out attack which would open a trace supply to the Sudden Death point B. All I need is to get in-supply attack-capable unit there at the end of my turn (that unit was put in the Reserve at the place where one British HQ collapsed and waited for the results of attack and Exploitation Phase).

I threw all of my 8-strength bombers to the only British bottleneck that blocked my trace supply to the point B. Bombers succeded in disorganizing enemy units and attack was victorious with DL1O2 result. I also had some tanks in reserve for redundancy purpose. The last DGed british unit retreated away from the road opening the trace supply, so my unit in reserve could freely drive to the Sudden Death point B. My friend learned much from that game: what you can do, what you have to do and what you shouldn’t do. He gained some feel of series tables and charts and combat capabilities of his units. So, he is ready for the rematch. I hope we won a new OCS adept today. Thank you for playing!