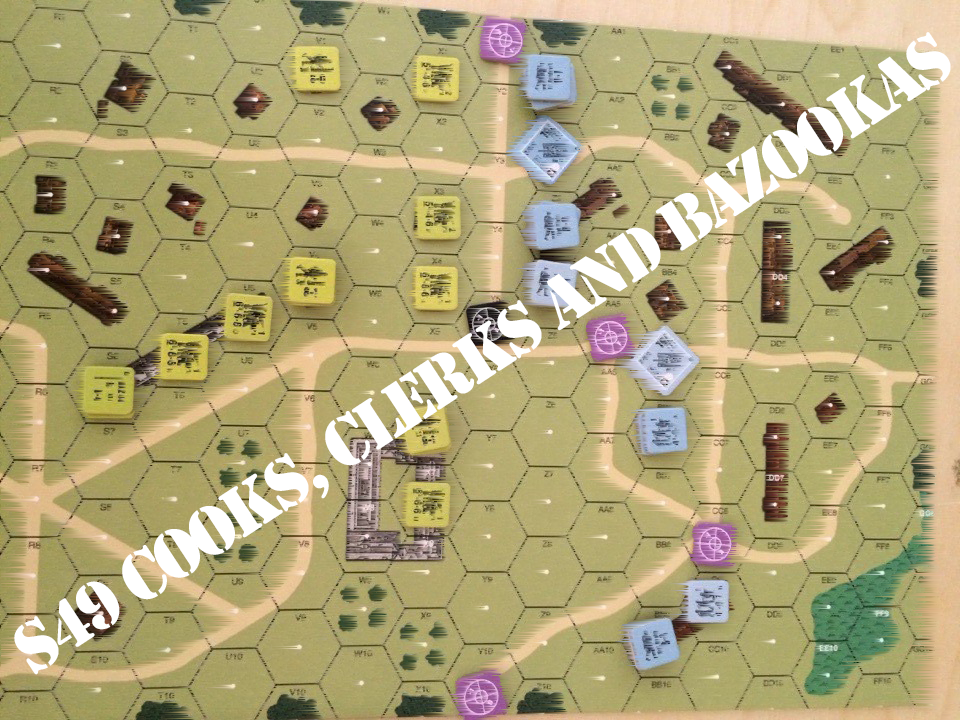 Blue line is set-up frontier – Americans starts to the left, Germans to the right. To win, Germans must capture all three stone building to the end of turn 7. Americans could hide 57L antitank gun and up to 2 MMC with weapons/leaders.

I played Americans and my plan was simple: create strongpoints with machineguns in objective buildings S1 and S2, create ambush strongpoint with bazooka in building A and conduct delaying withdraw operation on my left flank from line a to line c. So I hid the gun in the HIP point 1, pointing it to the objective building A. The second MMC with bazooka was hidden in the point 3 to be in reserve in the central position. So, final setup looked like this: What I didn’t foresee is that German starts their turn on the map right in front of me! So they stacked all the firepower they had and unleashed them on the frontline American forces. Results were truly catastrophic, my frontline became broken all the way: This preparational fire allowed Germans to cross the road without let or hindrance and capture solid positions for future attacks on objectives S2 and A. Two broken American squads were surrounded and eliminated in the Rout Phase. Survived 8-0 leader started his retreat to objective A. On the American T1, rally results were awful, so troops needed to regroup near S2 objective to hold it as long as possible and also skulk from German tank. On the second turn, Germans captured objective S2, so they could easily shell S2 building from two different directions. Covering squad in T3 hex was broken after next string wave of prepfire and one of the PzIVJ thrusted to the objective A where he was ambushed by Bazooka team, but with no effect: Americans decided to reveal their antitank Gun and set the PzIV ablaze on German turn 3: On American T3 another uncautious tank was burned and the last one failed Morale Check and became stunned. Objective S2 still stands fast: On the turn 4, German advances through the objective S2 and ties last defending squad into melee. Gun crew broken. American tanks are on the ground but unfortunately not so lucky. 75mm tries to outflank Germans, while 105mm secures the last stone building. Several American MMC successfully recovered and ran to the last objective: On the German T5 Gun Crew luckily recovers and burns the last PzIVJ, but got pinned and broken later once again. Though, it done everything Americans wanted. Both American tanks guarding advance paths to the last objectives. American squads regrouped and looks fresh, Germans still clearing the S2 stone building: Germans analyze American defence system, check how much time (2 turns) and forces left (no tanks) and concedes having captured only 2 objectives of 3: