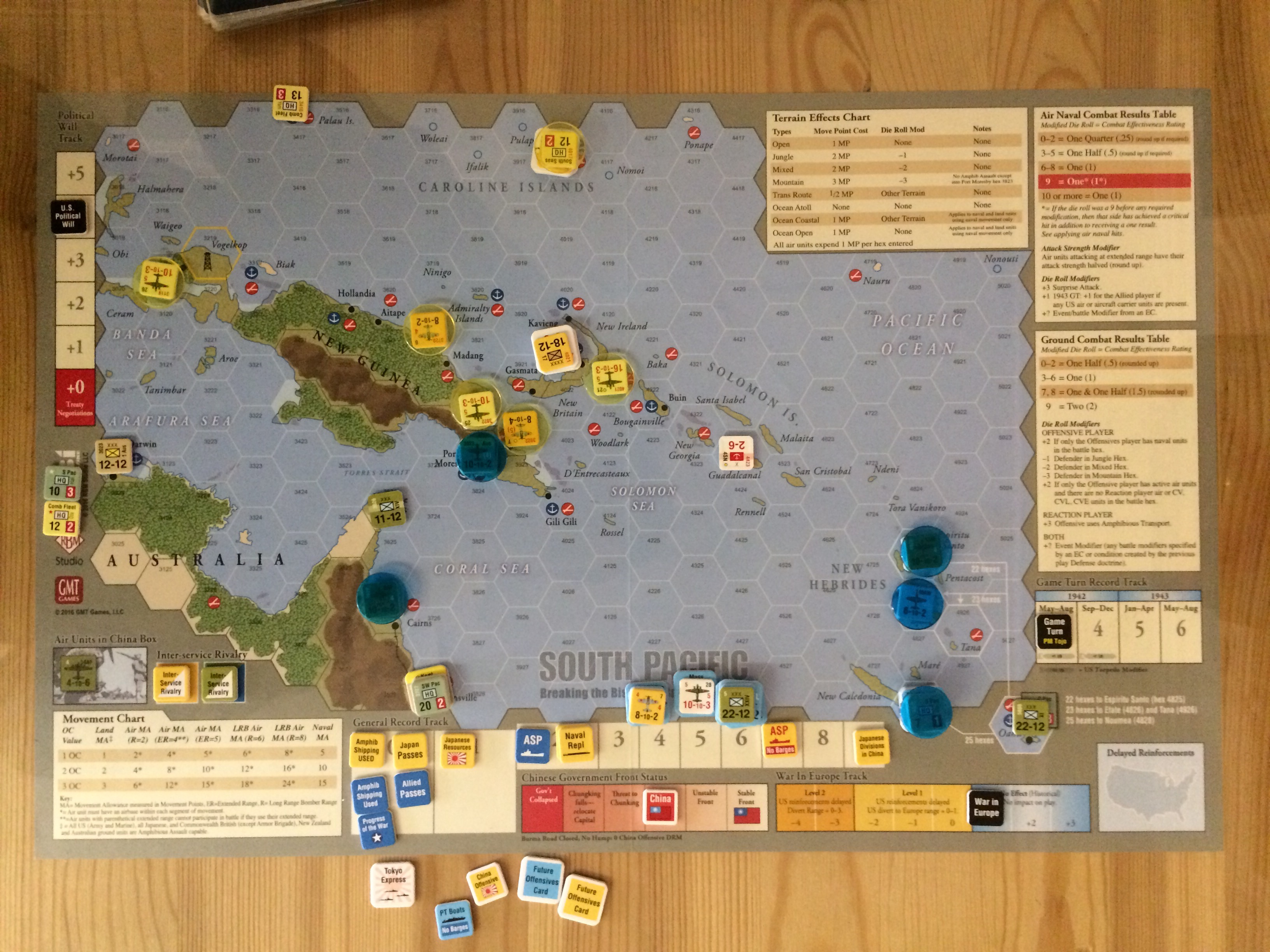 South Pacific is a great way to learn or refresh it famous parent’s rules (Empire of the Sun). This scenario-game is dedicated to breaking the Bismarck barrier, which is Japanese controlled archipelago dominated by New Britania.

In the game terms, the player who controls 3 resource/port hexes more than his opponent wins the game. There are 21 such hexes on the map, 12 of them start under the Japanese control and 9 of them are Allied controlled. There are also some automatic victory possibilities, if one manage to destroy all enemy HQs, all Allied naval units or drop US Political Will to continue the war to 0. All other outcomes considered a draw. Scenario starts in the eve of the Operation Watchtower, allied invasion on island Guadalcanal. Allied player even has the card of the same name in his starting hand (under Future Offensive marker). Blue and yellow markers represent Air Zones of Influence. First turn was quite lucky for the Japanese. Americans tried to capture the Guadalcanal several times, but every time the Japanese intelligence roll was successful and IJN saved the day, so the marines were turned back to continue the rest on Hebrides. Allied took the operational pause to regroup on the second turn, so Japanese took advantage of the situation: their 18th army was transported to start the offensive on Port Moresby by ground next card play! After the fierce fighting, Port Moresby fell to Japanese hands. So the Joint ANZAC HQ fled on the turn track and Bismarck barrier looked as strong as never. On the third turn, there was a first Allied successful amphibious invasion on the Gili Gili, east end of the New Guinea. The base could allow Allies to recapture the Port Moresby by the ground offensive. On the last turn, Japanese tried to secure the victory opportunity by capturing Espiritu-Santo, one of the northern islands in New Hebrides. The operation was a success! Several Allied stacks were pinned by declaring the Combat Hexes, invasion force reached the empty island, but anyway, Allied special reaction roll was a miss. Allied took the island back via next card play, but it wasn’t enough to deny the Japanese victory! Here’s the Allied losses to the end of the game.