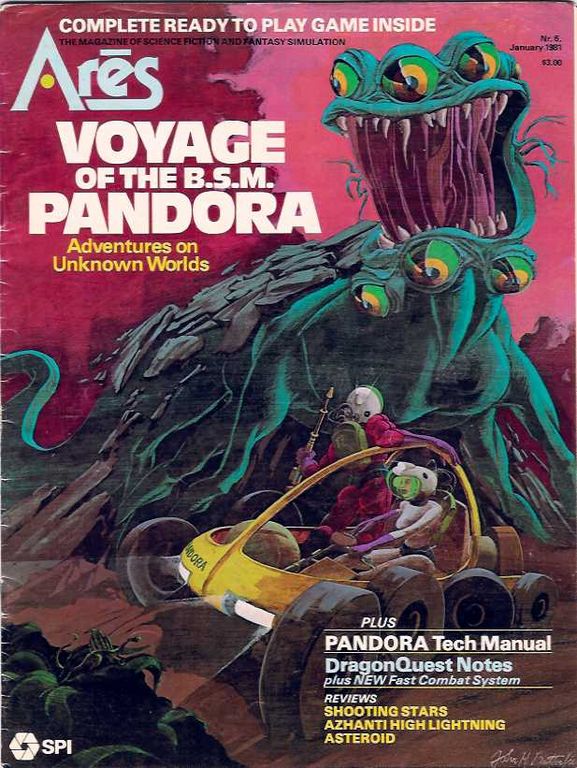 Recently I had a chance to play SPI gem Voyage of B.S.M. Pandora. I wish I had such game in my teenage years, but it’s stiil very immersive so far. Our first planet was Memphisto – a mountainous, rocky, surface with poisonous atmosphere, lifeless as we thought after hours of fruitless search. In the north we found a cave and decided to descend there. Here was our very first contact with extraterrestrial form of life – a giant chitinous insect. In the cave he had nowhere to run, so we easily captured it, though took 4 damage. The Picole voyage was the funniest one. In the vegetations we found a little sneaky ameba-like creature named Paraboid. It escaped from us three times, as we comb the planet. After the first encounter we received a stress signal from the shuttle, that some kind of metal-addicted insects eat our ship, as we left no one there. We were forced to return to disperse them. After the third encounter with Paraboid insects returned and we decided to leave the planet. As we reached our shuttle just in time, before it was eaten, Paraboid appeared too and this time we captured him (I think I know now why his Intelligence was 2). Another planet worth mention was Suwathe – big Earth-like planet with a lot of water and swamps. As it had swamps, we wanted to find a huge Swamp Beast! And we found it (Scorsaur). The planet was a big prize for us, as we encountered three creatures, though captured only two of them. The last voyage that day was New Aldo planet – hostile, poisonous with deep heavy jungles. The mission was quite short for us. In the first forest hex we encountered a giant butterfly that slipped away extremely fast. We took a rest at the pond where our Weapon Officer Maga drank from the pond and… died. We were forced to drop the supply and equipment to bring his body back to the shuttle and bury him with reverence (by throwing into space). Another intriguing great little game with replay potential thanks to huge amount of encounter paragraphs (200+).