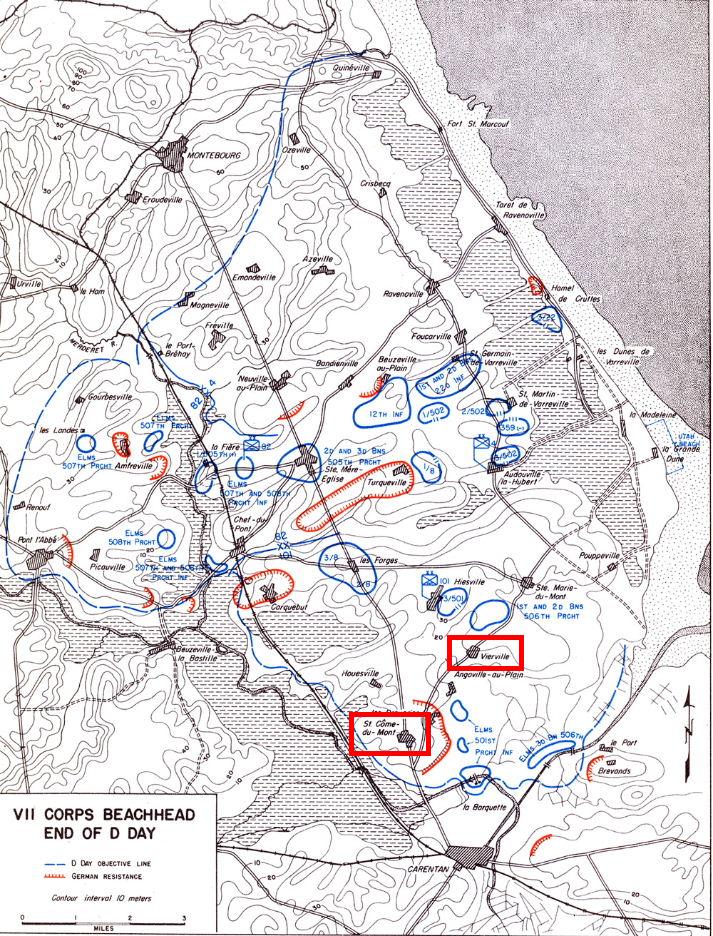 I have a grand plans to play all ASL Starter Kit scenarios from first to the last one with some analysis. We will play it in tournament style: both opponents will choose a side secretly. If chosen sides are the same, die roll will decide the issue and losing side will get a balance of the scenario. Let’s start from the all-time ASLSK classic: S01 Retaking Vierville. I’ve chosen the Americans and opponent chosen Germans, so no balance this time.

From historical notes: Vierville, France, 7 June 1944: On D+1, the 101st Airborne found itself embroiled in a two-fold effort: consolidating its units which were scattered all over Cotentin Peninsula and establishing a firm eastern perimeter to protect the American landing at Utah Beach. Vierville, which lay a few miles inland from Utah Beach, had been liberated by American units on D-Day. Vierville was a major traffic thoroughfare since the southwesternly road which passed through Vierville led from Utah Beach to the German strongpoint of St. Come du Mont. On the morning of June 7, elements of the 2nd Battalion, 506th PIR moved out from Vierville towards St. Come du Mont, leaving Vierville virtually unoccupied. The Germans took this opportunity to launch a series of counterattacks on Vierville in hopes of cutting the road to St. Come du Mont. The scenario lasts five turns, to win scenario, there should be no Good Order (not broken or in melee) German units in the following buildings: One American paratrooper platoon starts on the road near the objectives. Two German infantry platoons comes from east and west of the map on the 1st turn. Three American platoons will come as reinforcements for three next turns from the north. Two German Fallschirmjager platoons will come as reinforcements from the east edge of the map on turns 2 and 3. Let’s notice 3 x 4-6-7 German MMC, as they should be used to outdistance Americans.

Let’s apply OCOKA principles here. OCOKA is an acronym that stands for:

The OCOKA process is founded on the principle that “terrain has a direct impact on selecting objectives; location, movement and control of forces; effectiveness of weapons and other systems; protective measures.” Though, objectives are already chosen for us by Mr. John D. Johnson.

Observation is the ability to see friendly and enemy forces and key aspects of the terrain in order to judge strength, prevent surprise and respond to threats. This aspect becomes more crucial in full ASL games. Field of Fire is an area with a direct line for sight that weapons may cover/fire upon effectively from a given position. Concealment is protection from enemy observation and surveillance (which again makes more sense in full ASL). Cover is protection against enemy fire. Obstacles are natural of manmade terrain features that preven, restrict, divert, or delay military movement. Key Terrain is any ground that must be controlled in order to achieve military success. Key terrain typically offers control of a local objective or an important transportation route, like high ground with good observation; choke-points such as water crossing, etc. Avenue of Approach is any relatively unobstructed ground route that leads to an objective or key terrain. German player should estimate US fields of fire (orange on the map) to plan his avenues of approach to the objective hexes (red). We have a key group of three buildings (blue on the map) which allows Germans to cut American reinforcements, skulking if needed. Germans need to direct eastern platoon here, as its squads has range 6, so it could effectively cover American reinforcements. Buildings P1 and R7 (purple) may seems as key terrain due to improved fields of fire, but these positions are very dangerous because of isolation. If American paratroopers break one of this position, broken squads will stuck here forever. So, Germans may try to capture key terrain with eastern platoon, approach to objectives with western platoon and make a pressure on set-up Americans with the first eastern reinforcement. Set-up Americans should try to control objective hexes and put pressure on key terrain to lighten arrival of reinforcements. Americans reinforcements has two midsafe avenues of approach through the grain fields, as central path could be taken only after destroying forces protecting key terrain.

Let’s see what we’ve got in the real engagement! I’ve chosen the following setup to cover the leader with one squad from German Advancing Fire. Germans divided their platoons to capture as many directions as possible so they lost an opportunity to concentrate forces and efforts in particular place. American Turn 2, US maneuvering allowed to take all reinforcements into the action. Trying to reinforce my right flank objectives with additional forces. But I still have a timing window to reinforce the flank once more. German assault stalls in T5, forces are shattered and destroyed on the open ground. Opponent concedes at the end of his T5. From the historical aftermath notes: Small units from the 1st Battalion, 506th PIR rushed to Vierville and threw themselves into a pitched battle with the Germans. The tide of the battle changed several times as each side received reinforcements. Ultimately, the firepower and determination of the American airborne troops proved too much for Germans, who gave up their brief hold on Vierville after a tough fight.