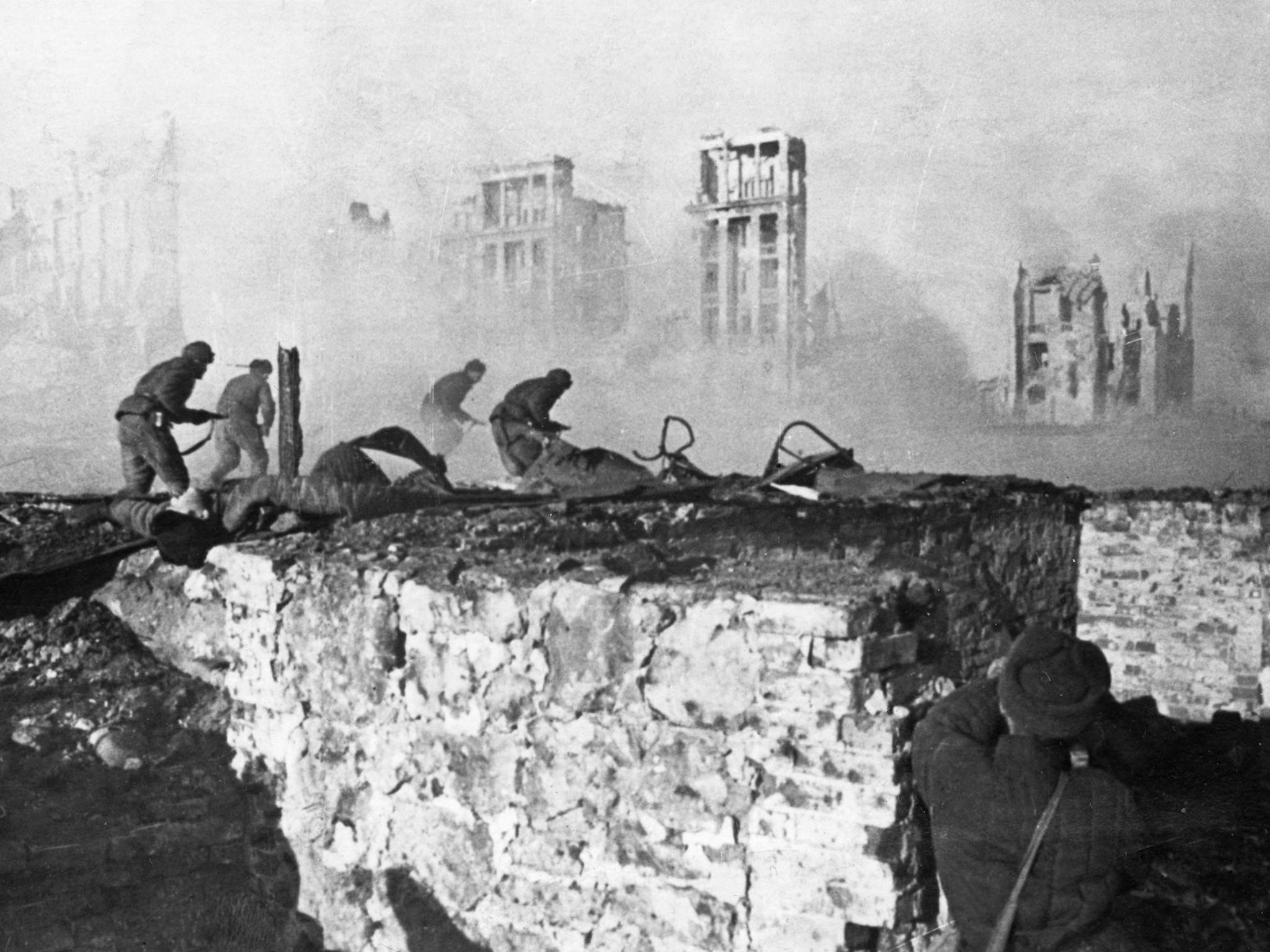 From historical notes: Stalingrad, Russia, 26 September 1942. During the summer months of 1942, German forces had advanced nearly unchecked across the Russian steppes. With Russian resistance west of the Don River broken, Hitler ordered Army Group B to capture Stalingrad. Using the traditional German tactics of lightning thrusts and envelopment, and with the Russians retreating before them, Sixth Army commander Paulus sent an armored spearhead into the suburbs of Stalingrad in attempt to quickly capture the city. The German tactics failed inside the confines of the city, however, as the Russians were able to dig in and fight from every building. The initial spearhead blunted, the Germans committed more units and soon realized that this was a very different battle from what they had been fighting. The confines of the city stifled manoeuvre, and German superiority in artillery, air power, and armor were rendered ineffective as the infantry of both sides intermingled while fighting for each block of the city. This was Rattenkrieg – the war of the rats. The scenario lasts six turns, to win scenario, Germans must control following buildings at the end of the game: So, approximately three Soviet platoons (one of them is Conscript) with support of 1 x MMG and 2 x LMGs defences against four german platoons supported by flamethrower, MMG, 3 x LMGs and two demolition charges. Starting Turn 2, there’s a chance for Soviet reinforcements of one SMG platoon (from the south).

During the setup, Soviets must consider the presence of the enemy FT, so it’s better to setup machine gunners out of it’s range. There are also 5 x low range Conscript squads with low morale. So, maybe it would be wise to set them on the second line of defence to not lose the early.

Germans has increased smoke exponent (4 for Elite MMC) and great collection of support weapons to punch some holes in defences before the advance. I think that MMG and FT should be placed to support attack on the main effort direction.

Let’s again apply OCOKA principles here. As you remember, OCOKA is an acronym that stands for: Let’s start with Soviet side analysis. We have a map with a lot of good cover and LOS obstacles thanks to dense stone houses distribution. Front line buildings gives absolute observation and fields of fire, though they are vulnerable from concentrated German Prep and Defensive Fire (much more powerful than Soviet could give back). Soviet player cannot ignore purple buildings as abscence of units there will create a gaps in an observation system for the Soviet right flank and will ease the German Prep Fire as there would be less targets to choose. The positive side of purple buildings is presence of fall back positions out of enemy LOS, so broken squads may withdraw there with leader to Rally. I would designate central objective factory and row of 1-hex buildings E8-H6 as a Key Terrain. As you remember, Key Terrain is any ground that must be controlled in order to achieve military success (get an objective). The central factory is a place that divides the map on two pieces. If you control the factory, you may redirect your attack in any way having a good base. Soviets shouldn’t give up this building too early, as it will isolate O6 objective from the rest of the force. Germans, conversely, should try to take it as soon as possible. The row of stone buildings E8-H6 is an essential place to be the last stand with an objective as a fall back position. Units in these buildings controls almost every avenue of German approach. Orange building is a jump-off posistion for Germans to launch an envelopment attack to F8 objective, so Russian should protect it in the later phase of scenario (reinforcements would be handy there). Let’s check the German attack possibilities with an avenues of approach. German initial Prep Fire should concentrate on making some blind spots in the Soviet LOS system. So the targets could be chosen as shown in red. Possible smoke positions for advances are also shown. Options 2 and 3 are little scary to use from the first turn as units will end MPh in the open, vulnerable for an enemy Defensive Fire. So, maybe it would be wiser to shake Soviet defences from the flanks, forces the to redistribute units and then support attack in the center. If you’re attacking on position 1, it would be useful to also suppress M5, so you units will meet minimum enemy impact during DFPh. Position 4 is also looks good, as your units will become concealed from enemy LOS if you suppress both hexes. If one concentrate the efforts on both flanks he will have a flexibility to exploit the success where it appears and knock the Soviets off balance.

Let’s see what we’ve got in the real engagement! I’ve got the Germans with balance and made the following setup after checking the Soviet one. As you can see, I didn’t realize the importance of the right flank during the game and concentrated my efforts on the left flank and in the center: Though, I achieved a great success on my left flank during the DFPh, as opponent choose not to skulk. Soviets started to move towards the crumbled flank in the advance phase and fell back with broken squads. I’m making some progress on my left flank. All I need is Soviet reinforcements doesn’t enter the game on Turn 2. And of course, they are entering on Turn 2 as 1 was rolled. So they gonna block my way to envelope 3rd Objective. Germans pushes the center to hold some Key Terrain, but melee 2 to 1 with -2 leader from my side… I made a great mistake, forgotting to keep DM on those broken guys. Leaders also were very unlucky with DC attacks. Left flank envelopment continued on Turn 4 supported by flamethrower, Soviet fired back with no success. Soviets had a lot of time to take defensive positions on the edges of 3rd victory buildings on their Turn 4. Flamethrower almost cleared 2nd Objective on German Turn 5, but I made an disasterous manoeuvre on my right flank while prepared the final push. Melee finally ended at the end of German Turn 5 (lasted for 3 turns). Last Soviet halfsquad caused a casualty reduction before the death. Soviets regroups for the last time in the face of final wave. Final German push on Turn 6 ended in a disaster. I conceded after the miss of FT in AFPh. War of the Rats is a bloody mess of scenario. I think it’s balanced and played very tight till the last die roll. There are casualties we had during the play. As I said in the beginning, I put too little efforts on my right flank, so attack became unbalanced. It’s very painful to run across the open ground to the 3-hex building cram-full of enemy MMCs. If the Russian keeps rolling higher than the Turn number, his reinforcements may never enter the board… and thus, the scenario could turn out very unbalanced.

From the historical aftermath notes: The Germans continued to try and take the city in a bloody battle of attrition. Gains were measured in terms of rooms and floors of buildings, with any German penetration met by an immediate counterattack from an ad hoc force up to 100 men. By forming these specialized shock groups for the task at hand, the Russians were able to withstand the German onslaught.

2 thoughts on “ASLSK Walkthrough: S02 War of the Rats”