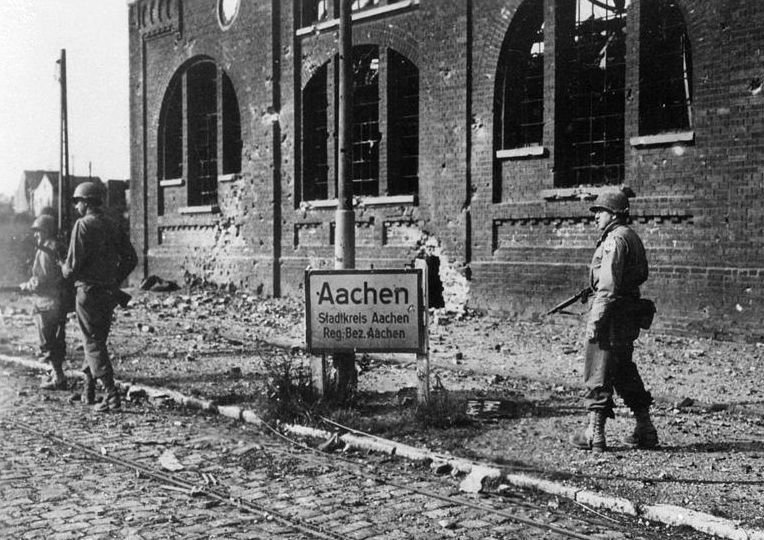 From historical notes: Aachen, Germany, 12 October 1944. The battle for the city of Aachen had been raging since October 10. A complicated series of maneuvres designed to encircle the city from both the north and the south had been occupying the attention of the American command. These few units committed to the frontal assault on Aachen had some tough going. Not only were the Aachen defenders numerically superior, but they were fighting on their home soil for one of the cherished Nazi symbols: Aachen, home of the First Reich.

The scenario lasts seven turns for Americans and six for Germans, to win scenario, Americans must control 25 buildings on map Z at any moment. You may see approximate areas which contains 25 buildings on the map: Americans got the balance, so I removed one 4-4-7 from OOB – very painful. So, four low quality German platoons with 1 HMG and 3 LMG defends against five mid-quality American platoons with 2 MMGs and FT.

Germans should use the forces very accurate, as the map area is wide, morale is low and numbers are small. Americans should get as close as possible to use advantages of FT and close combat. Smoke exponent 3 should make a difference here.

Let’s return to our OCOKA principles: As I understood after scenario end, the blue positions are crucial and should be considered as Key Terrain. All 4 positions have solid rear areas for skulking. Positions 1 and 4 easily protects flanks thanks to nice fields of fire and safe rear area. You should use maximum of positions 3 and 4 to take advantage of your stone buildings against woods. Consider to put HMG in position 3 or 4 to make Americans think twice before attacking on their left flank. Position 2 is the most important here, as it is the last line, where Germans may shoot in the woods with good DRM. It’s also good spot, as American cannot effectively project firegroup attacks here. Once you withdraw from position 2, prepare to painful close quarters firefights and CC, which favors the Americans. There are also auxiliary purple positions which provides better Observation and Fields of Fire, but more vulnerable to American attacks due to more opportunities to create firegroups. Once you feel, that’s enough for you, it is possible to withdraw to orange areas. Don’t save your CX here, as Americans will catch you quicker than you think (that happened to me) and if you do not cross the road, you’ll face all the charm of FT, Assault Fire and CCs. All you need is to play for time having advantage in DRM, so, as soon as you leave positions 1-4, time will play against you. Judging by ROAR and aslscenarioarchive data, it’s quite easy scenario for Americans, though one shouldn’t be very relaxed! I think that Americans should concentrate their efforts in the center, as orange Avenue of Approach X is a killing ground until someone encircles defending Germans there. Americans should move to create an effective firegroups on the red line 1 on the 1st Turn to make a good Prep Fire on Turn 2. The main target for Turn 2 Prep Fire is a purple line 2, as you will use it to launch an assault on Key Terrain 4. The problem of line 2 is that you couldn’t use your FT against Key Terrain 4. Intermediary positions 3 will solve the issue, but use the only if there no more dangerous Final Firer left. After you get into Key Terrain, all the roads opens for you, just smoke narrow open areas, encircle broken German squads and concentrate for effective close combat odds to leave no one behind.

Let’s see what we’ve got in the real engagement! It’s gonna be painful against the Americans with balance, but that’s the challenge! My setup was conducted in connection with described OCOKA considerations, but I’ve put too much forces on purple advanced positions. Opponent divided his forces to distribute them amongst all of the front.

First American AFPh broken two German conscripts. I’ve made my first mistake here – routed them to the leader in the woods. I should have put all of them in the stone building one hex lower. Though I’ve broken 4 MMC on my DFPh – great achievement to buy some time! On my Turn 1 I do some skulking in the center and leave all the guys in place on the right flank to do some firing. I’ve tried to withdraw the last squad from advanced position to avoid devastating firegroup attack, but it was broken in the process. On their Turn 2, Americans advanced to the purple line and took some risk with putting a flamethrower into the woods (interposition 3). I didn’t broke the FT team, though I passed Morale Check from their 24 FP attack in AFPh. Thanks God, I’ve broken the FT team with two separate Prep Fire attacks. Right flank still the same – a lot of firing and breaking in the woods. I decided to withdraw one conscript from there as I have enough FP to keep enemy heads down. American Turn 3. Both intermediary positions are captured to prepare a push on my Key Terrain. FT team was rallied after the first try. On German Turn 3 I’ve made my second great mistake, that decided the course of action: withdrawn my forces back too early to unprepared positions without covering each other. Now I realize, that right move would be stay and skulk here, as a lot of American MMC became 2-line due to ELR. I continue my withdrawal on Turn 4, hoping to hold the south buildings from attaking force, though defences became extremely thin after the losses. Americans advances on their Turn five to create a deadly firegroups to support the dash across the road. Already 17 buildings under their control. I do some skulking on my Turn five, though unfortunate defensive fire breaks my penultimate unit that could do something to protect the buildings from American human wave. I concede at the end of Turn 5. I think that Germans should hold Key Terrain as long as possible, not paying attention on their losses, so then Americans will attack in tough conditions and could be running out of time.

From the historical aftermath notes: Although Aachen’s defenders were a mixed bag, Hitler had ordered that they fight to the last man. Retreat or surrender was not an option. This attitude of the Germans combined with their superior numbers, almost stalled the American advance. However, the men of Colonel Corley’s 3rd Battalion developed a pattern that was repeated by the Americans at every stronghold. They would neutralize enemy fire using machine guns and then, under this cover, flamethrower would advance and eliminate the position. In this way, the Americans made good progress against the resourceful and resolute enemy.