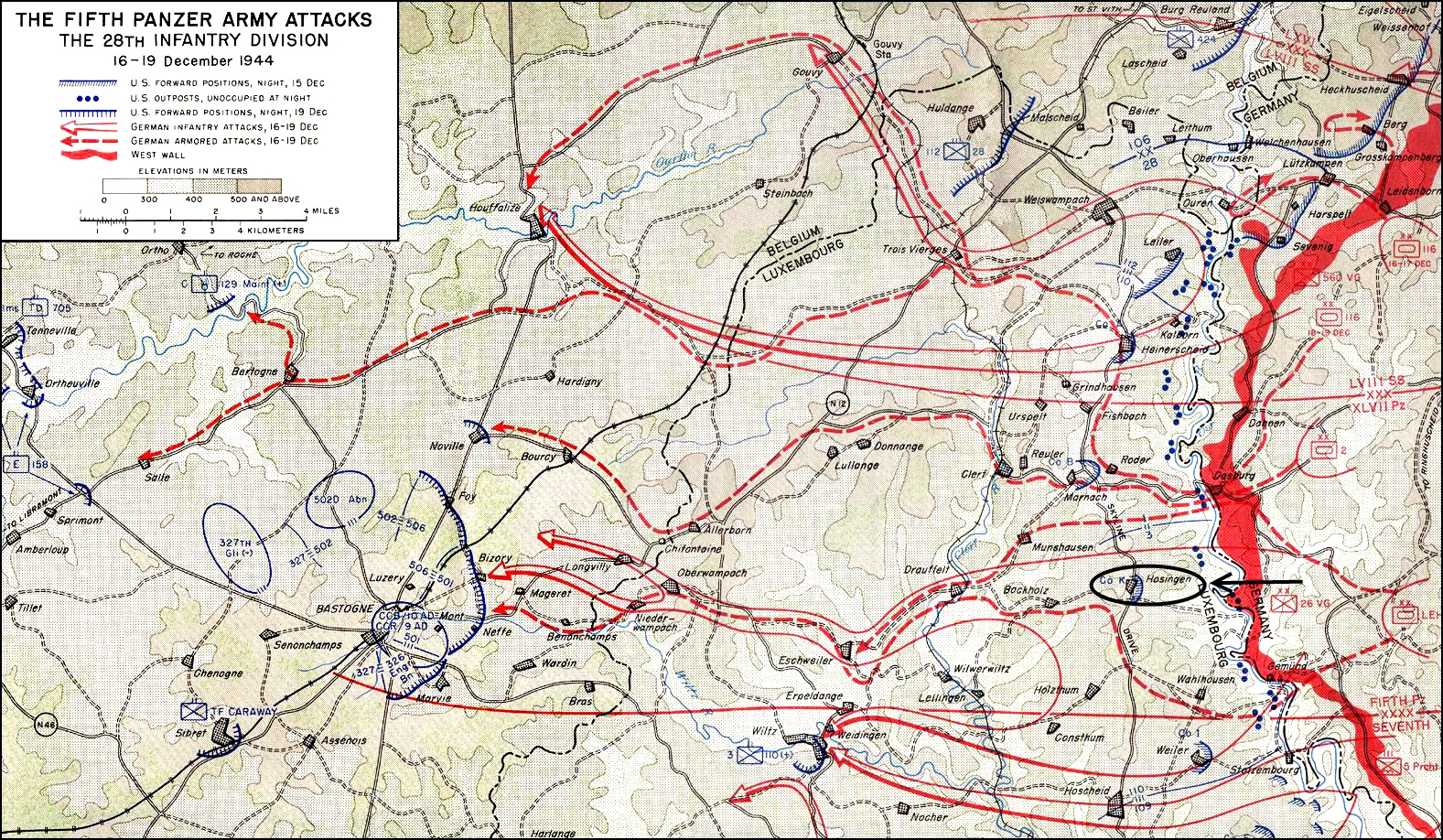 From historical notes: Hosingen, Luxembourg, 16 December 1944. The 110th Regiment of the 28th Infantry Division had been tasked with the defence of a narrow ridge running between the Our and the Clerf rivers in Luxembourg. The Regiment sa astride Route N16, a road known to the Virginians of the 28th as “Skyline Drive”, one of only a few paved roads in the Ardennes. For fifteen miles the Regiment lay sprawled along the length of the Ridge in a series of fortified strongpoints, often reinforced with armor and antitank assets. One such strongpoint was the town of Hosingen, where Company K, along with Company B of the 103rd Engineer Combat Battalion, was posted. At 0525 on December 16th an intense artillery barrage commenced which set several buildings ablaze and damaged some trucks but otherwise left the Americans unscathed. A thick fog obscured anything beyond a few hundred yards and as the morning progressed the Americans began to hear Germans bypassing their positions to the north and south. These were units of the 77th Grenadier Regiment which had assembled in the woods east of town prior to the bombardment and were now on the move to seize the bridge at Clervaux. Around 0730 the fog began to lift and shortly thereafter the Grenadiers attacked Hosingen in an effort to take control of the vital roads leading west.

Germans enters the map from the east edge on Turn 1. American setup zone: I’ve got Germans. No one have got a balance this time. It’s a hard puzzle for Americans how to not overstretch their limited forces over the map, so every part of the defence system could support each other. In my mind, those precious 7-4-7 squads with FTs should guard the central stone buildings area and long range guys should overrange incoming Germans on the flanks. As for Germans, they should concentrate all efforts on one part of the map to create surplus targets there and infiltrate to the rear quickly. So, MMGs should suppress some defenders and then all the rest forces should be used to exploit overstretched defences with decisive rush.

But first lets check possible avenues of approach for attacking side, as if it concentrates all efforts in one section:

There are three general Avenues of Approach for the attacker:

1 – Infiltrate to the exit zone beyond the woods on the right flank. There are some choke points where properly set residual fire would hinder the movement, but it will be still possible, as FF and GG columns of the map provides shortest and safest path for some squads. It will be also hard to exit the map, as jump off wood hexes creates another vulnerable choke points.

2 – Rush to the stone building in the center. The worst option as there are a lot of killing ground there and the distance to the buildings is pretty long.

3 – Infiltrate the strong points in the buildings to get to the woods. A lot of Concealment provided by orchards and the distance is quite short. Though, residual fire could also create a problems here.

So what defence options do we have here?

First of all, I wouldn’t put much forces on the left flank of the defence. I would position some squads in purple positions 2 to cover the center and left flank approaches, as these positions mutually supports each other and could be reinforced by each other (high smoke exponent will help there to transfer squads from one position to another). I would also put one 6-6-6 squad with MMG to the lonely building in position 3 on American left flank to guard AoA 1. If there’s no threat on that flank, it could be quickly transfered to the sector where it needed the most through the useful position in U3 where it can stay if needed.

The most threat comes from the 3rd Avenue of Approach, as there are a lot of concealment to launch an offensive. I would definitely put some forces in blue positions 1 with one MMG, as Germans would cross an open ground to reach them and residual fire would create much pain there. I would consider to put someone in reserve in purple position 1 if I have some spare force to prevent a possible breakthrough. I wouldn’t put anyone in red position 2, as it provides average TEM, and what more important, it’s isolated and could be easily overrun. So let Germans have it – they couldn’t bring there a lot without risk of stacking. Defender right flank purple position 3 is where elite squads with FT will shine slowly withdrawing when needed to the Key Terrain – blue position 4. It is a last stand for Americans to prevent precious German VP from exiting. I think that the best position of HMG is blue lonely building 4. It provides a great fields of fire controlling both uttermost exit hexes (ROF + Residual can make a difference in those hexes). It’s up to you where to use 10-2 leader – with HMG or in the meatgrinder. I would use him on the right flank of the defence to provide DRM for firing and Rally, resisting German fire.

Let’s see what we’ve got in the real engagement! Opponent made following setup: It’s very foremost setup with not many fallback options for the defender, so I’ve decided to rush in sector 3. Though, first turn seemed disasterous for me due to lucky Final Protective Fire rolls: Anyway, Germans manages to run through all those residual and FPF to the empty American rear on their Turn 1. Americans tried to regroup their forces, but some of them were caught on the open ground and broken. They started too far. At the end of German Turn 2, a lot of VP were ready to exit the map. So the opponent conceded at the end of his Turn 2, unable to reach exiting troops. It’s important for the German player to analyse where defences are most thin and concentrate there. It’s also very important for the defender to create mutually supported position even at the cost of losing some ground from the very beginning.

From the historical aftermath notes: The American position had been bolstered by Company M’s heavy weapons as well as machine guns the Engineers has removed from trucks and positioned as part of the defence. The initial attack failed to gain a foothold in the town, and the Germans had to bypass Hosingen while follow up attacks were made to take it. Though heavily outnumbered, surrounded and possesing only one day’s supply of ammunition, the Americans held Hosingen against the entire German regiment until the morning of 18th. Remarkably they suffered only twenty casualties while inflicting hundreds upon the Germans, but a lack of ammunition and supplies eventually forced their capitulation. As the survivors marched off to captivity they could take consolation in the knowledge that they had at least made the German’s return trip to Luxembourg a costly one.