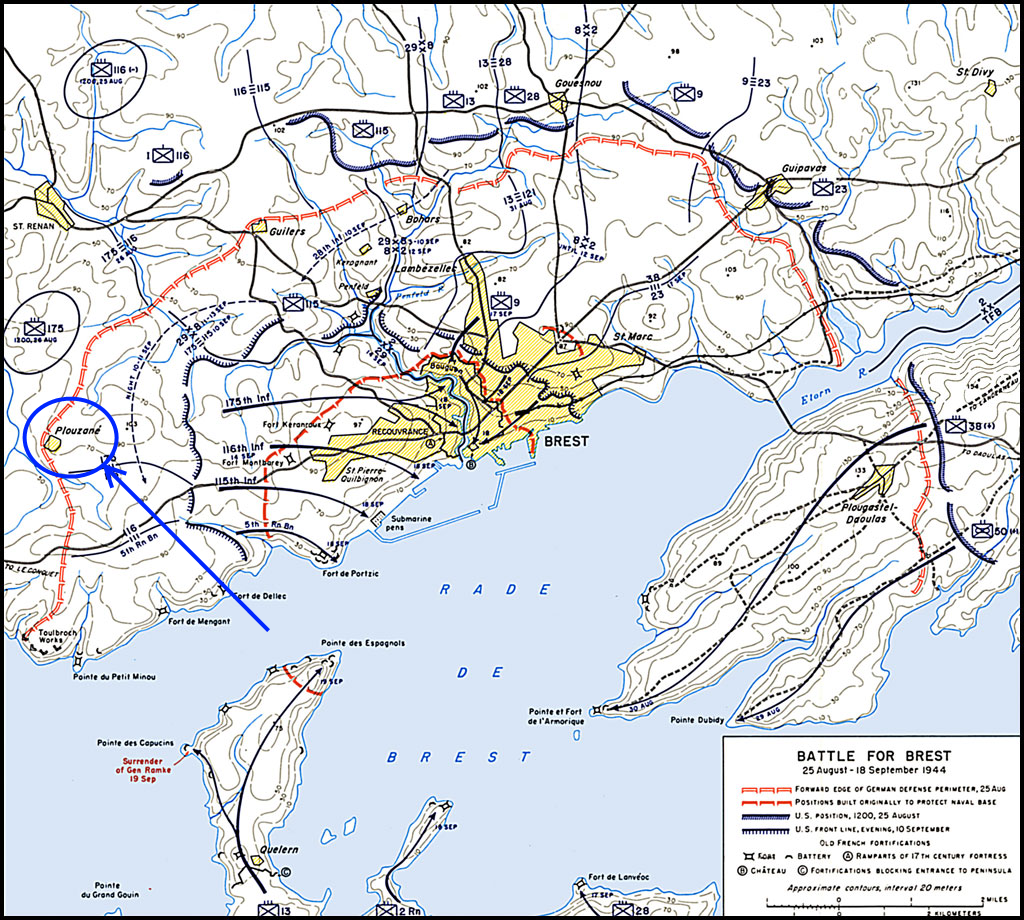 From historical notes: Plouzane, France, 26 August 1944. Before surrendering Cherbourge to the Americans on June 26th, the Germans first demolished enough of its harbour installations that it was of little use for many month. With supplies still limited to what the Allies could bring in on the beaches of Normandy, possession of the Breton ports of Brest and Lorient therefore appeared critical to the campaign in Northern France. The success of operation COBRA and the capture of Avranches allowed Patton’s Third Army to breakthrough into Brittany on August 3rd. From Avranches the 6th Armored Division covered the 200 miles to Brest in five days, bypassing strongpoints along the way, but finding the city’s defences too strong to take by a quick thrust. Two weeks later, on August 23rd, the three infantry divisions of VIII Corps arrived to take over the assault on Brest. I’ve got Germans vs. Americans with balance, so add one more 6-6-6 for them. It’s a very tiny scenario where two platoons of elite German Fallschirmjagers defends against a company of regular American infantry (Blue and Gray Division is here!). High German morale allows to use them in an agressive manner, don’t be too aggressive though, as they are low in numbers. Americans should implement “shoot then move” tactics under cover of smoke, as they will not typically withstand any punishment in the open.

First of all, remember, that you couldn’t setup on red line X, no matter how much you want it. The Key Terrain 1 is crucial one, as the left flank of German defence is very likely to be American schwerpunkt thanks to dense orchards approaches. Though, left flank gives not much victory building hexes, so I would distribute 6 squads between left and right in proportion to victory buildings like 2 and 4. You may also safely withdraw to Position 5 from here (thanks to continious building) until Americans took Positions 2 and 3.

I would not recommend to take Position 2. It looks solid on the first sight, but it is not. You may not skulk from there, Americans could bring 3-hex devastating fire group there and if you decide to withdraw, you’ll make it via open ground visible hexes. So, you may put someone into Position 3 to cover approaches on your right flank and also put some firepower in Key Terrain 4 to cover approaches to Positions 2 and 3 using holes between buildings.

Key Terrain 4 is your last man standing line, as Americans could easily capture 13 of 15 victory hexes if they made you retreat from there. You may also bring devastating 4-hex firegroup shots from there to any American unit advanced to your previously occupied Positions 2 and 3.

As Americans, you have starting line J from where you should try to reach jump-off points A, B and C on your first turn, to start bringing those deadly American firepower in Advancing Fire Phase. From there you generally has two “big” options:

Avenue of Approach 1 is more safely in terms of cover and concealment. You may even spend turns 2 and 3 to approach 4-hex stone buildings using assault moves (under cover of smoke) and advances. If you manage to make a breakthrough and clean-up there, it’s possible run further deep as again you may hide from flanking fire with smoke and it would be hard for Germans to run after you.

There’s also more conservative Avenue of Approach 2 from jumping point A. First of all you should put heavy fire across the street to reduce incoming defensive fire. Opportunity to form 3-hex firegroup there should help (I would put both MMGs there). Try to approach from your left flank where you have only one open ground hex before the safety of the stone building. Should I mention that you need a smoke here? The second part of assault will be the same as the first one, but you may form 4-5-hex firegroup there depending on the target hex). I would also leave leaders on both flanks behind to rally the troops, as they wouldn’t help much in assault itself due to eight morale.

Let’s see what we’ve got in the real engagement! Germans made following setup: Americans answered with their setup: On their first turn, Americans rushed to the jump-off points, but some of them were punished through the holes between the stone buildings. On German first turn I made some skulking, one squad became pinned, so I lost a possibility to redistribute squads in Position 3 and only one squad remained there. Americans made some advances through the blind and low visibility spots on their turn 2. On German turn 2 I decided not to test the luck and withdrawn to Key Terrain 4 on the right flank but also drove away dangerous American squad on the left flank. Americans immediately took Positions 2 and 3 on their turn 3. What I started to do from German turn 3, is to bring 4-hex firegroup shot upon one American squad and also redistributed defences on my left flank. On their turn 4, Americans tried to bring some more firepower on the front to knock at least some of my squads, but without results. No changes for German at turn 4 – just shooting with 4-hex firegroup. Miss this time. American and German turn 5. Nothing new here – shooting back and forth, breaking one squad from each side. American last turn. All is left is launch a desperate assault on German position. During the assault, 9th casualty VP was achieved by Germans and there was no way to capture 15 stone building for Americans, so they conceded. From historical aftermath notes: Defending Brest was the 2nd Fallschirmjager Division under General Bernard Ramcke, who was determined to follow Hitler’s orders to hold the Breton ports “to the last man”. He established an outer defense line about 3 to 5 miles from downtown Brest, with the small town of Plouzane on the western perimeter in front of US 29th Infantry Division. Since taking terrible casualties at Omaha Beach on D-Day, the “Blue and Gray Division” had been busy fighting its way through the Norman bocage – opposed much of the time by the 3rd Fallschirmjager Division. The 115th and 116th Regiments attacked towards Brest on August 25th, and the next day the 175th Regiment attacked in the Plouzane area, with its 2nd Battalion tasked with seizing Plouzane village itself. The fallschirmjagers defending the village were supplemented by the marines from the naval base in Brest, and this mixed group engaged in house-to-house fighting throughout the morning. That afternoon they withdrew and regrouped on a neighboring hill, Coz Castel, which dominated the area. The 175th had completed the encirclement of Brest, but the Coz Castel was not taken until September 3rd, and Brest held out until September 18th, by which time it – like the other Breton harbors coming under Allied control – had been rendered useless by German demolitions.