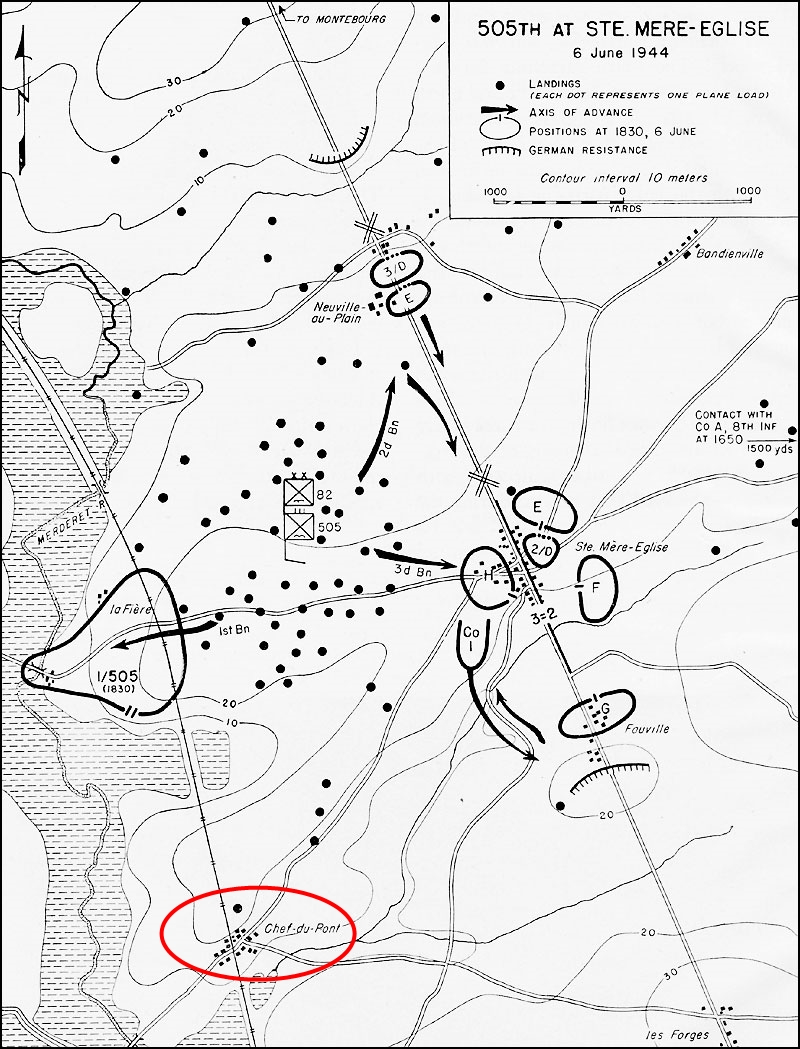 From historical notes: Chef-du-Pont, France, 6 June 1944. One of the responsibilities of the airborne troops landing behind Utah Beach was the seizure of several key bridges following the D-Day drop. Brigadier General James Gavin, Assistant Divisional Commander of the 82nd Airborne, found himself as the senior officer near one of these bridges, the one at Chef-du-Pont that led to the causeway over the flooded Merderet marshes. Once Col. Maloney arrived with an extra 75 men, Gavin organized a pickup force  to take care of this bridge himself. With elements of the 507th split into two groups under himself and the 507th C.O. Lt. Col. Ostberg, they marched on Chef-du-Pont by parallel routes. The scenario lasts six turns for both sides. To win, Americans must exit >= 1 squad (or 2 HS) and >= 1 SMC off Q10. For every German HS that exits off of Q10 the Americans must exit an additional HS (each squad counting as two HS). Setup zones are following (both American groups enters the map on Turn 1 from the edges): So it’s three American paratroopers platoons without any support weapons against two regular German platoons. I’ve got the Germans without balance, as there were two players against me (each opponent has got his own airborne group). It’s very simple scenario in terms of force and means.

First of all, Germans should remember to have someone near the exit point to increase the American requirements at critical point of the game. I would recommend to separate German forces in proportion to American groups, so 3 MMC to cover the left flank and 4 MMC to cover the right. It’s also would be wise to put 4-4-7 on the left as the terrain is much more close there, so you wouldn’t need powerful 6-hex range there.

Purple positions 1 would be nice place to put some starting firepower to force Americans make a hook through the forest (as I1 and H1 would be under fire on the open and smoke is a 50% gambling there). Purple position 2 is good to put a MMG here, as it would control any approach from the right flank. Key Terrain 3 is last defensible high cover position on the left, so try to stand there as long as possible, pushing Americans back to the forest. Key Terrain 4 is good at the later game turns, as it controls the exit point and it’s impossible to bypass it without a fight. Key Terrain 5 is German last stand on the right. It provides an excellent cover an hindrance to be prepfired and it has a lot of open ground to prevent any bypass.

I wouldn’t recommend to start at positions A and B, as they too much isolated from the rest of the map and can be easily bypassed or supressed by American platoons.

As Americans, I would consider 3 Avenues of Approach. Avenue 1 is the safest but the longest one for the smaller American group. It should be taken into account if Avenue 2 is guarded well and denied for the assault. Avenue 2 is a great one only if you can overcome the starting jump-off point. It provides excellent cover for rapid advance and American supremacy in melee could be applied here. Avenues 3 are the safest for the larger American group. You may also gather nice firegroups along this one to knock out any German strongpoints effectively. Anyway, don’t forget to use smoke when dashing through the open!

Let’s see what we’ve got in the real engagement!

Germans made set-up at Positions 1, 2 and 5, Americans rushed on the both sides of the map on their first turn and Germans corrected their positions after that:

On the second turn Americans started to bring down devastating firepower on the German right and also made some doubtful maneouvers on the Germans left, separating own forces:

Germans reacted with maneouvres on the left and fire on the right:

American Turn 3: very cautious advances on the left and Rally withdrawal on the right, as too much was broken by German fire:

German Turn 3: some movement on the left to control bottom American MMC:

American Turn 4: still too cautious on the left. Though, there were a lot of successful Rally on the right, so deadly firegroup was deployed again:

American Turn 5: Prepfiring left no mathematical chances to get to the Q10 on the Turn 6, so American players conceded.

From historical aftermath notes: After sizing up the situation Gavin and Ostberg attacked. Their combined forces flushed the Germans from the hamlet at the approaches to the bridge. Instead of giving up, however, the Germans fell back onto the causeway with their machine guns, and Col. Ostberg was wounded in the run up to the bridge. With the open ground covered by this heavy firepower, the paratroopers were denied the bridge for now.