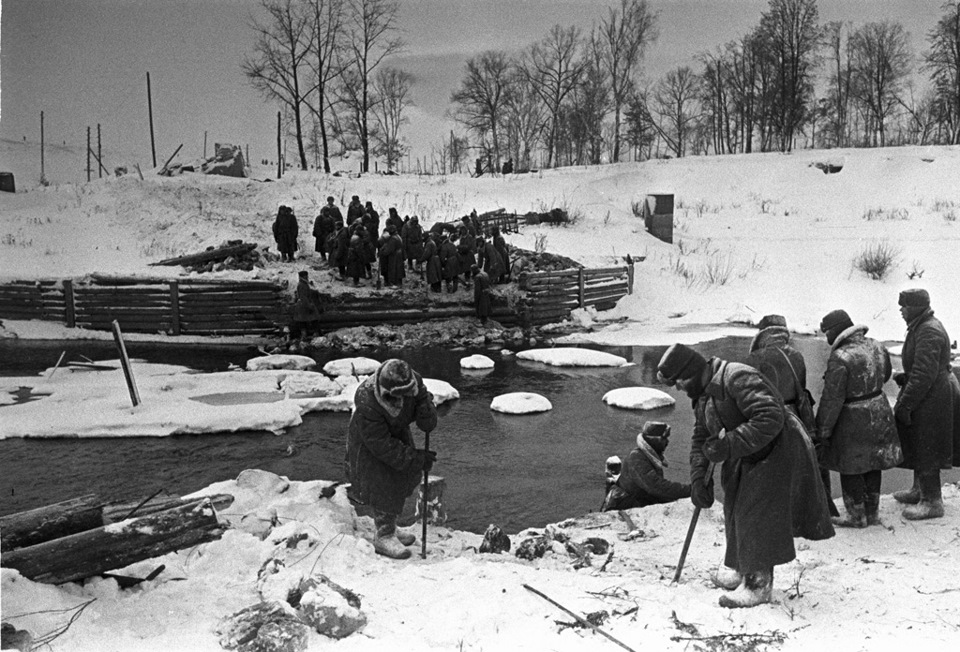 From historical notes: Istra, Russia, 11 December 1941. As the drive on Moscow slowed due to supply problems and “General Winter”, STAVKA was given time to deploy fresh troops from other fronts. The 78th Infantry, led by energetic 38-year old General Afanasy Pavalontovich Beloborodov, was transferred 6,000 miles from their native Siberia to the Sixteenth Army under Rokossovsky. Veterans of the Mongolian frontier, the Siberians would use skillful ambushes and delaying tactics to slow the panzer’s march on Moscow. Near the River Istra, they were finally ordered to halt and fight. The snow-covered fields and the medieval town of Istra itself would become a battlefield for several weeks. On 26th Novemver, the 78th was renamed the “9th Guards Infantry”, but needed no special titles to display elan and heroism. Squeezing out of the pincers formed by 10th Panzer Division and 2nd SS “Das Reich”, the “marvelous Siberians” would regroup and launch a counterattack to retake the historic town. I’ve got Russians, no balance for anyone. Forces from both sides has a high morale, so it should be less scary to move and pass morale checks. SSR increase German morale on broken side and cancel -1 FFMO if Russians make assault move in the open. Russians also may create tactical reserve up to 5 MMC with 1 SMC and 2 SW, that will enter the map on Turn 3 from original or side edge of the board.

First of all, it’s important to scare Russians from the concentrating their efforts on the open ground in the center and their left flank, so you need to put some firepower in purple positions 1-5. I would not reccomend to put someone further to the right, as these forces will become isolated, easily bypassed and their way to the blue Key Terrain (objective buildings themselves) will be too long. Forward positions 1-6 control almost every Avenue of Approach, more than that, they allow you safely withdraw to Key Terrain if things becomes really bad.

Position 1 will deny Russians to use edge of the map for breakthrough. Troops from position 1 could be quickly and safely transferred to position 7 to protect the flank from Russian tactical reserve and than fall back to Key Terrain A when time has come. Position 2 is also great intermediate position between Russian possible entry point and Objective A. Positions 3 and 4 is where your reserve should be created as you control Avenues of Approach to Objective C and can quickly move either to Objective A or B, should Russians concentrate on any of them. Position 5 controls some approaches to Objective B, but it should be supported by positions 6, so if enemy bypassed you from the far right, you may meet him with some shooting until reserves come closer. There’s traditional “Time for Space” game for Germans, though Russians must cross the open ground without smoke anyway.

As an Attacker, it’s recommended to concentrate efforts in some chosen place and not disperse forces. You have only 14 MMC vs 9 MMC, so it’s not big quantitative advantage. I would use tactical reserve at maximum there, as 5 MMC could surprisingly appear not far from objective A or C on Turn 3 when original defense scheme would be changed due to battle circumstances. During an assault you need to use your winter camouflage as often as possible, so it’s important to have a starting positions from where you may make assault move adjacent to objective.

So, we have five general Avenues of Approach to our Objectives. Avenue 1 is a very risky one, as defender could easily create killing open ground at point blank ranges and you have no much to deal with it. Consider to use this Avenue only if defender cannot create much “-2” shots and residuals. You may also enter your reserve here, if defensing troops were transferred to reinforce another Objective.

Avenue 2 as original AoA also should be considered only if German doesn’t sit tightly there. It’s a comfortable way of approach for your tactical reserve, so try to lure defending forces from there with your initial forces.

Avenues 3 are good when you reached the stone houses. Until then, it’s very narrow and easily controllable by Germans.

Avenue 4 is the safest one, as Germans shouldn’t put much forces there due to fear of isolation. But this AoA is also a longest one. While you making your way to the group of stone houses near Objective B, Germans can reposition their defences without a haste. But once you arrived, you have a great concealed assault approach through the orchards.

Avenue R is where your tactical reserve could pop up and create some chaos at Objective A. On your Turn 3 check what Objective (A or C) has thinner defences and put reserve there.

Let’s see what we’ve got in the real engagement! Germans made following setup:

I decided to create maximum tactical reserve with MMG and leave a mobile group to rush AoA 4 with DC.

On my Turn 1 I put two squad to attract the enemy fire and rushed the rest with CX. Only one broken!

Germans started troops relocation, but one squad was caught on the open and broken.

On my Turn 2 I locked in melee forward German squad and advanced further towards Objective B.

Germans reinforced approaches to Objective 2 on their Turn 2. Both squads died in melee.

On my Turn 3 Self-Rally with 8 morale wasn’t successful. I started assault on Objective B, though it didn’t start ideally. My tactical reserve infiltrated the only guard and took Objective A. It was my critical mistake here to run from the back side of the building and not cover the approach of 9-2 with MMG. It also wasn’t wise to throw two squads into Melee, as one of them immediately died.

Looks like I forgot to take a picture of German Turn 3, so it’s my Turn 4 going next. Self-Rally failed again. I took Objective B and scared to go too close to 9-2 , as 16 @ +1 shot could be painful. Enemy put his reserve to the Objective C.

Germans prepared to meet an assault on Objective C during their Turn 4 and also created one melee to hinder my efforts in Objective A.

Russians advanced more closer to to Objective C from their right flank and decided to put somebody there from the left flank, though 9-2 stack killed everyone who tried.

All Germans need to do on their Turn 5 is to hide someone in the farest corner of Objective C, so Russians losing even mathematical chances to capture that building.

Russians last chance is low odds melee in Objective A with went unsuccessfully, so it’s German victory on Turn 6.

From the historical aftermath notes: With their tanks and other heavy equipment ineffective in this severe cold, the grenadiers of Das Reich haved to face the eastern shock troops man-to-man. The Siberians proved superior in these conditions, with most of the firefights ultimately decided by cold steel and sheer bravery. After changing hands several times, the schools and museums of Istra were all but flaming ruins when the 9th Guards finally prevailed for good on December 11th. Soon the Russians would be advancing, pushing the freezing and defeated Panzerkorps back to Istra River. On January 3rd, the Fuhrer himself issued the order to halt the retreat – but the Russian capital was now out of danger for good.