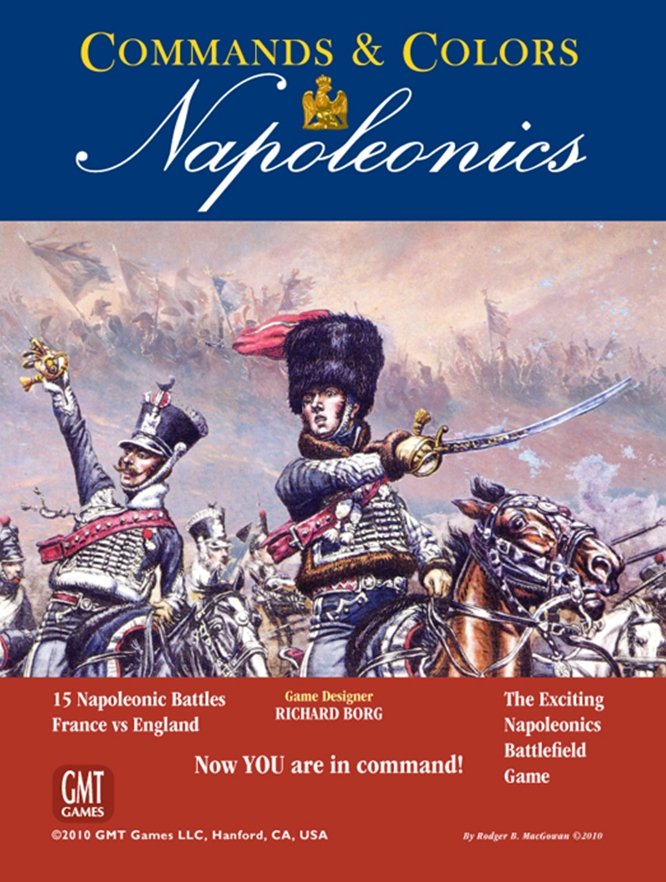 As you browse numerous articles and discussions of Richard Borg’s games in the Internet, you will find very contradictory attitude: either laudatory odes, or scathing lampoons. In my opinion, his games feels very different even inside the same mechanics. So, even as I have some questions to Memoir ’44 (suicide squads, undying artillery, die face distribution), I see the adaptation of the rules to the turn of the XIX century very logical and harmonious.

So C&C: Napoleonics is a tactical wargame devoted to conquests of the first French emperor in Europe. Base game, and four expansions allows us to plunge into Napoleon’s confrontation with British, Portuguese, Spanish, Russian, Austrian and Prussian armies.

Army Corps on the march

A couple of words about command system. Regiment with two combat and one reserve battalions was the basic unit during the XVIII century. So strategic and operational commanders were required to manage a lot of battalions and that created a huge load on the headquarters, as command system presented numerous operations over small units. Divisions were created in the middle of the XVIII century to improve strategic mobility and control of the army. Divisions allowed to divide armies on several parts and move those parts to the objective using parallel routes to be joined at the destination. French integrated cavalry and artillery to the division structure to maximize the offensive power of the division. Napoleon continued to improve the organizational structure introducing and army corps consisted of 2-3 infantry divisions, 1 cavalry division, divisional artillery and reserve. During the campaigns, Napoleon tried to position his corps on the half day’s march away, solving the problem of the army separation. When the first corps engaged in combat, he tied an enemy army, while other corps made an envelopment maneuver. Described organizational structure reflected in the game scenarios in very similar way. The only possible opportunity to change something during the battle of that time was sending a courier with orders from headquarters to the divisional commanders. That had a number of obvious problems: courier could be sent with critical delay, his movement could took some time, so the order became irrelevant, he could be killed on his way and, the last, but not the least, divisional commanders that had a certain decision freedom could simply ignore or misunderstand the orders. I think that Borg’s sectional game mechanics perfectly reflects the command problems of the Napoleonics warfare (and couldn’t be used in WWII). The abscence of the command card for certain sections looks very natural.

Game system allowes to play battles of different scales, so the game units may represent divisions, regiments of battalions. There are three combat unit archetypes in the game: infantry, cavalry, artillery. Besides those three classes, commanders are also represented on the battlefield with separate game pieces. There multiple types of units inside of every archtype. They differs by movement, cohesion, numbers and firepower parameters. All this troops diversity creates very interesting combinations of units in every scenario, so you should decide how and where to use the certain type of unit. The line infantry was the core and the heart of every army. At first, all armies of the Napoleonic warfare use line formation to fire at the enemy with maximum numbers of muskets (usually in three ranks), and also deep formations – shock columns – for melee combat. Movement across the battlefield was conducted in columns and deployment from column to line to conduct a fire required high consistency within the unit. It’s reflected in the game with fire penalty after the march. So, every infantry unit fires with two times less dice after the movement. British line infantry receives additional bonus die if fires without movement, as it used two ranks formation and payed special attention to fire training.

Light cavalry moves up to 3 hexes, heavy cavalry moves up to 2 hexes. Any cavalry may fight only in melee, as shock tactics was the most common for both light and heavy units. Although many horsemen possessed pistols or blunderbuss, their firepower wasn’t high efficient, as there was no possibility to reload weapon after the first shot. Usually, cavalry attack began with a pitch and speed gradually increased to maintain the density of formation as long as possible to provide maximum shock effect.

Artillery could be either foot or horse. Foot artillery either fire or move. Horse artillery can either move two hexes without fire or move 1 hex and fire. Artillery of the Napoleonic warfare conducted direct fire, based on the rebound from the ground, that prolonged the flight of the cannonball, so you need unblocked line of sight to fire with artillery. A. Gros. Napoleon Bonaparte on the Battlefield of Eylau in 1807

In every scenario players has one or more generals on the battlefield. General provides two useful tactical bonuses: he allowes to ignore 1 flag from the enemy attack; he can stop retreating unit if stays alone in the hex. The last property especially useful for militia which retreats 3 hexes per flag. It’s not so hard to kill or capture enemy general, so possibility to withdraw him by the friendly edge of map is very handy.

It’s time to talk about the features of the battle system in C&C: N. Battle die contains 2 infantry, 1 cavalry, 1 artillery, 1 flag and 1 sabers (joker) sides. Any range fire combat uses “clear” hit, the joker doesn’t work. So, it’s 1/3 chance to kill an infantry step and 1/6 to kill cavalry or artillery step. In melee joker works for the most types of units (besides militia and 95 british rifle regiment armed with short Baker’s rifles, that weren’t handy in melee, but provided 3-hex fire range). In melee, chances to kill infantry step increases to 1/2 and chances to kill cavalry or artillery step increases to 1/3. Not retreated unit survived melee may battle back. Unit supported by at least two adjacent friendly units may ignore 1 flag. British units takes cover behind the hill before assault

Number of rolled dice based on strength of the attacking unit, it’s personal modifiers, terrain modifiers and played card. So, for example, British Light Infantry unit with 5 steps will fire on enemy unit in the forest: 5 + 1 – 1 = 5 dice. After the march that unit would fore 5/2 + 1 – 1 = 3 dice.

The most of the infantry units fires at 2-hex range, foot artillery has range of 5 hexes, horse artillery – 4 hexes.

I like the realization of Napoleonic warfare tactics. First of all, it’s the square – special infantry formation for repelling cavalry attack.

Redeployment from line to square formation

Redeployment to the square demanded high consistency and strong nerves of infantry in the face on cavalry steel fist. The success of redeployment of the firing line to the square was a matter of life and death. In C&C: N, redeployment always successful automatically without any additional morale check. Unit in the square formation is immobile and ineffective in offensive, so player should freeze one of his command card randomly on the special display. Infantry cannot leave the square formation, if it has enemy cavalry in adjacent hex, but it rolls 1 die against enemy attacking cavalry like a first strike. Survived not bounced cavalry attacks infantry square with 1 die. For that case Napoleon considered artillery support of cavalry attack as a mandatory rule. He used horse artillery for that purposed as it could keep up with the cavalry unit. Those batteries were armed with light guns shooting light cannonballs (that characteristics also reflected in the game). On the other side, artillery dealt with highly vulnerable targets – dense defensive formations, so almost every shot found it’s goal. In the case of danger, horse batteries could curl up as soon as possible and get out of the threatening attitude much faster than their foot colleagues.

We have such combined attack in the game, more over, artillery could support as cavalry and foot offensive adding it’s dice to the combat roll.

Infantry unit that destroyed enemy or forced it to retreat may take the ground and advance after combat. Cavalry may conduct bonus attack after such advance. Cavalry also have an option to retreat and regroup in the face of attacking enemy infantry to suffer less casualty.

Let’s sum up a little bit:

Carl Paradis offered home rules to increase units hit points, but I like the original rules, as they impose more strict requirements on planning. The victory conditions are traditional for the series – we receive victory banners for destroying enemy units and capturing key terrain. Some people complain about “frag hunting” but I will appeal to history there. The battle was conducted till the night fall and armies were withdrawn till the morning. It is possible to evaluate the degree of success by inflicted losses, and inflicted losses forced enemy army to retreat and lose combat. The game has high replayability value with a lot of scenarios in the base game and expansions. You may find them at this great resource: http://www.commandsandcolors.net/napoleonics/.

In the bottom line we have an excellent gateway-game on Napoleonic historical period with a high level of immersion, a number of scenarios that offers an interesting tactical problems to solve. And all of this takes 90-120 minutes per battle.

One thought on “Commands and Colors: Beautiful world of Napoleonics”