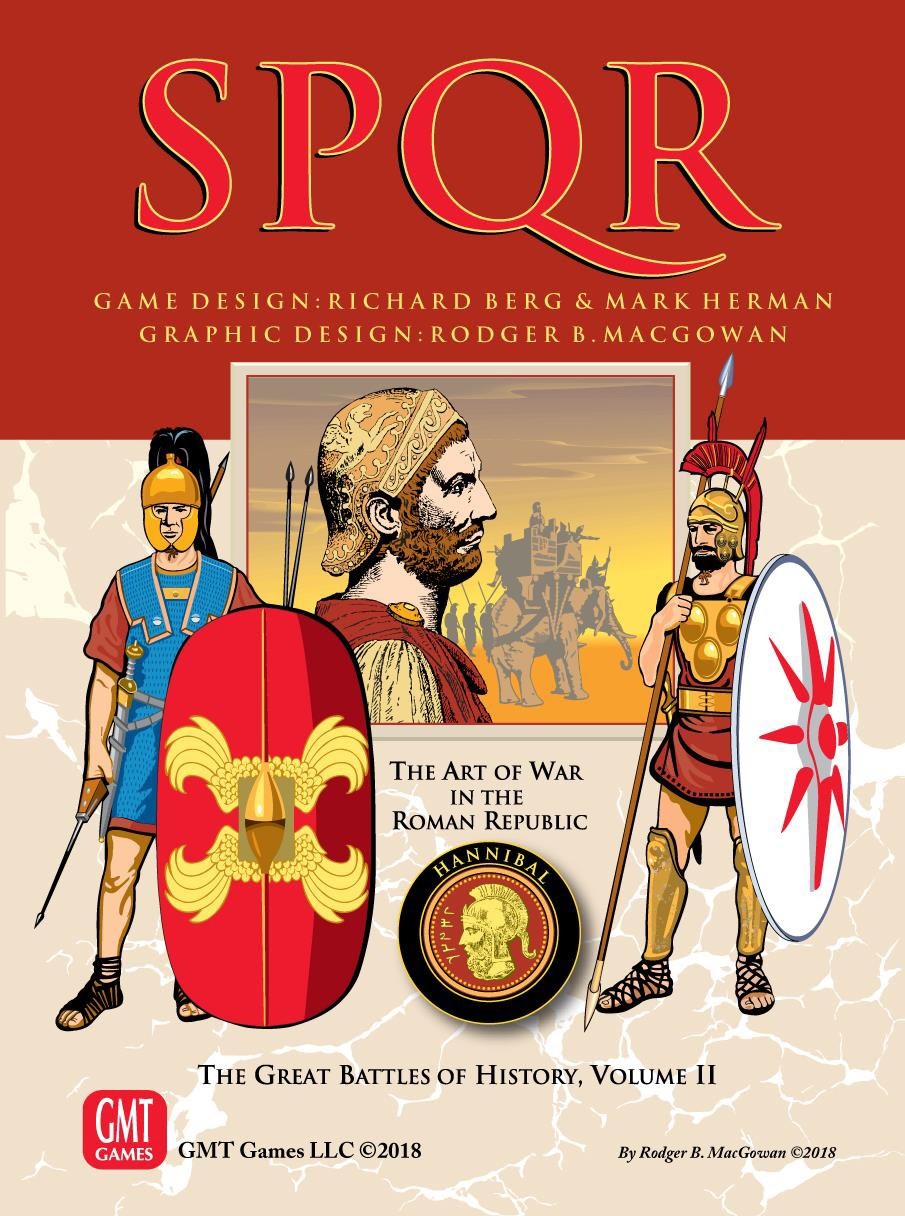 Great Battles of History is a truly labor of love of two splendid game designers: Mark Herman and Richard Berg. If you ever immerse into ancient battles with John Warry or Peter Connoly books containing many illustrations, colorful maps and schemes, or maybe you read translations of Polybius and Arrianus, the best affordable way to visualize those ancients clashes is Great Battles of History wargame series.

First of all, just look at all components that included in the box. You’ll got six back-printed maps, six countersheets, rulebook, three(!!!) scenario booklets with 19 battles and player aids. It took me 4 GMT Games counter trays to sort everything, including counters from SGBoH Battle Manual.

All scenarios accompanied by detailed historical background, design/historical notes, accessible set-up tables, difficulty and balance considerations. There’s also a bunch of scenarios from out of print C3i Magazine issues on the magazine’s web-site (and by bunch I mean about 50 battles for Alexander and SPQR) that were generously shared by Rodger MacGowan.

There are two common ways to play Great Battles of History: using simple ruleset if module allows it (though it called Simple GBoH, I would call it “Not so simple GBoH”, as it has quite detailed and deep ruleset) or use dedicated module rulebook. Let me start with the full rules so you may grasp what kind of experience the game offers. I’ll try to comment the differences of the simple ruleset on the fly, so you may decide is it enough for your expectations or you’d like to jump into the rabbit hole.

The game system emphasizes the role of command on the ancient battlefield. Leaders are the most important counters in the game. Without leader’s order, you precious phalanx and legions will not make a step towards the enemy.

Full rules implement the elegant understanding of initiative – on the battlefield you hold the initiative if you force your opponent to act first and can react on every move. So, leaders are activated in the initiative rating order from lowest to highest. Leader can issue individual orders up to his initiative rating to the units in his command radius, or if prescribed in the scenario, activate the whole line of units. Leader may also gain momentum, trying to take turn after the turn if passing initiative check, and the better leader may deny his momentum or even turn, by taking the trump attempt.

SGBoH implements simpler formation based command system. Activated leader issues order to all units that belong to his formation and also several leader determined by scenario has limited pool of attempts for the course of battle to keep the momentum and seize the initiative (steal the turn) from the enemy.

The game represent full spectrum of ancient unit type: many types of infantry, several types of cavalry, elephants, chariots, camels, artillery – anything you could imagine on the battlefield or read from Polybius. I would say that full rules will give you a better feel and understanding of the roles of different types of units. You will learn of their strengths and weaknesses just after several shock combat resolutions, when you compare weapon systems using “Clash of Spears and Swords” and “Shock Superiority” charts. If ancient warfare is a new topic for you, you will very soon find out that to frontally attack phalanx in melee with your single light cavalry unit. SGBoH has several simplifications over the javelins, so you may find some of your skirmishers and light infantry not so effective, as in full rules, but the general idea of different weapon systems clashes mantained very well. The essential details of ancient warfare like elephant behavior and Roman manipular line extension works very similar in both rulesets. So if you have an hour or two to play using SGBoH, you won’t lose much details.

Movement through the ancient battlefield is closely interconnected with retaining (or losing) of cohesion, as every line unit counter represents 300-1000 men. Full rules propose many cases when units may take cohesion hits: rough terrain, turning maneuver of phalanx, pre-shock collision, withdrawal, cavalry pursuit, etc. Simple rules got the movement in much lighter and safer manner – units rarely lose any cohesion during the movement in comparison with full rules.

I like the implementation of shock combat so much! If an infantry unit heavier than unarmored javeliner moved adjacent to the enemy, it must attack because it cannot stop the movement inertia of such a men mass. Unit may start losing cohesion because of this initial collision even before the very combat started! Spears and Swords system in conjunction with Shock Superiority gives you an absolute idea about how different types of warriors interacted in battle.

Average length of full game is much longer due to more surviving capabilities of the units (when they rout, leaders may still catch and rally them, and when they lose cohesion, leaders may form them up) and slightly longer combat procedures. The difference may grow at larger scenarios, as in simple rules you always activate the whole formation, and in full rules you either activates several units in command range of the leader or activate the line of units, if they still eligible to be a line (and they become not after the first clashes of spears and shields).

I cannot name another game or game series that captures and delivers the feel of the ancient battle so precise and immersive. I usually awakes only after the final whistle of the game, when one side reached their army withdrawal level. And thanks to the existence of Simple ruleset it has an adjustable difficulty and playing time, so you may dive as deep as you want! The games of the series got reprint slots not so often. It took 10 years for SPQR to be reprinted and the last print run of Alexander is already gone. So, be sure to acquire this gem while it is still available.