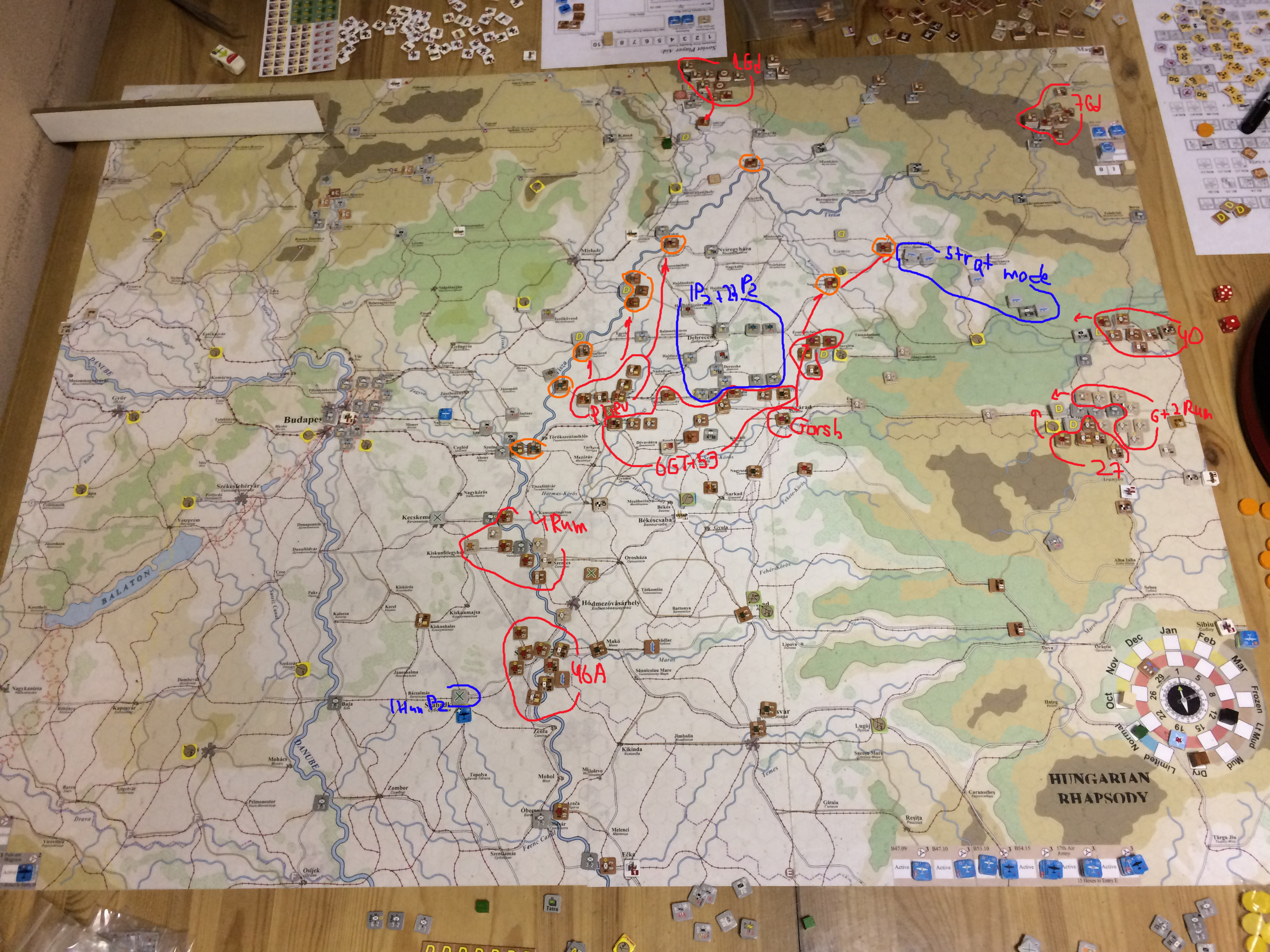 First of all, I would like to thank Stéphane Acquaviva for great opportunity to be a part of OCS playtest community.

Here’s the AAR of our first campaign playthrough that was stopped due to following changes to the Soviet setup. Our ambitious plan for the campaign was following (we did the planning for the whole day today).

We were going to advance the extenders to the maximum of the possible extent to attack Debrecen from the west using Pliev KMG and advance to the Kecskemet from the east. Such sudden jump forward should create a fear and doubt to the Axis, so they can make a mistake about how to deal with partially surrounded forces. At 4th Ukranian we were going to advance through the mountains without attacks yet, just to see the course of action Axis gonna make there.

Gorshkov Group was to be transfered by Strat Movement to the Nagyvarad to help cutting fleeing Axis forces from the east. The infantry of 2nd Ukr Front will advance north in move mode to swallow Hungarian frontline. Brown disks – are extenders places. White cubes – HQs locations, orange disks – victory locations in the end of the game. Green cubes – victory goals for 29 Oct-November. So, we advanced our Extenders almost to their limits from the supply sources, then we made an overrun to clear the path to one of them (38.08) and moved HQs in the 5 truck MP from extenders. Our plan was to advance as fast as possible towards Debrecen to make a pincer attack on it in the future. For the right branch of the pincer, we moved Gorshkov group to Nagyarad. Pliev group will be left branch of the pincer. Infantry divisions advanced in the Move Mode creating a solid front, swallowing all the Hungarian units in the reach.

As for 4th Ukranian Front, we decided not to attack, but slowly advance throught the mountains to come to the Axis rear with the possible Air Supply Drops when time will be right. On the right flank, we pinned down the German units and broken through to the right, creating a second bridgehead in the area.

On the opponent turn, there were some overrun attempts to breakout encircled units but all failed, we lost one artillery Bde though. Axis also destroyed some Partisans in Slovakia. Our general plan for the second turn: 46 Army + 4 and 7 Rum Corps should gather at the Tizsa and cross it later. 6 Guards Tank Army and 53 Army should create a frontline on the Debrecen direction and endanger 1 Pz Div. Pliev and Gorshkov continue to create a pincer on Csop. Pliev’s Corps should secure the enemy bridgeheads in the northwest part of the Tisza. 27 Army + 6 + 2 Rum Corps encircles Axis group on the right flank. 1Gd and 18 Army slowly crouch to the Axis back. 7 Gd Army strikes if barrage is lucky (it wasn’t). As you can see at the picture almost everything went smoothly, as we won the initiative roll and took it! As for Axis T2, they started to withdraw everywhere. It’s 12th of October in Hungary, we rolled normal flight and dry weather. Soviet team won the initiative and we took the turn to stall the German retreat from the east. Our supply roll was low this time – only 4, so we got 1-8-1 SPs.

Our plan was to higher the stakes and create Debrecen Pocket using Pliev and Gorshkov on the flanks as pincers and 6GT+53A in the center to pin Axis units there. So Pliev blocked all Tisza crossings from the west, Gd Motorcycle Regiment blocked Csop and got 2 airdrop tokens for “trace” and combat supply. Gorshkov blocked railroad nodes on the right side of the future Debrecen pocket and killed one juicy stack in Strat mode (from retreating Axis reinforcements). It’s very risky for our mobile corps, as they are far from the infantry and communication nodes, but we believe it should bring the result. 40 Army is pursuing retreating Axis. We were lucky to kill two SS cavalry regiments. 27 Army and 6+2 Rum corps are pursuing Axis rearguard and were able to reach and surround them.

Shlemin’s 46A with 4 and 7 Rum corps crossed the Tisza and took Szeged. Now we have 46HQ in Szeged and it can throw trace to Danube from there. On the north, only 1Gd brokenthrough, smashing Axis rear lines.

Some statistics for that turn:

We spent 27 tokens in fueling, 37 tokens on artillery barrages (mostly from the North and East) and 52 Tokens for combat. Hard but fruitful turn for us.

After that, we received the message from Stephane, that several testing groups advanced with the Soviets too far, so the next iteration of campaign is needed. Looking forward to play again!