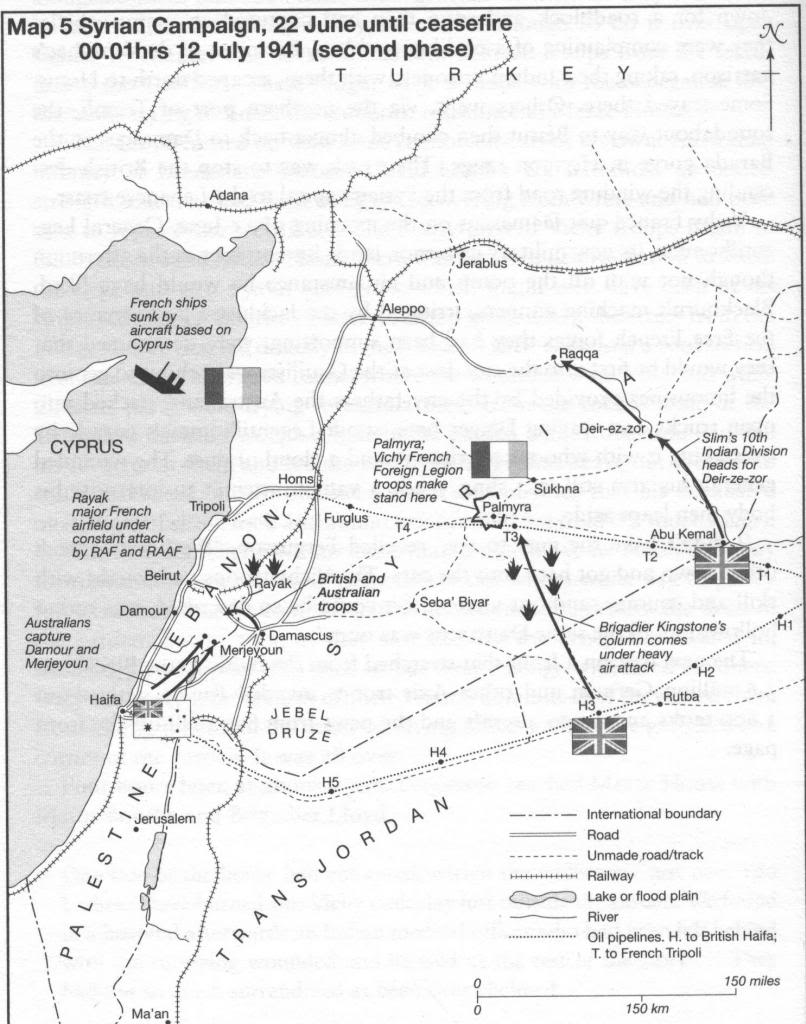 Here is AAR about rematch RE campaign for the same sides (I played for Vichy and Pavel for Allies), as we needed to consolidate the covered lessons. As you remember, the weather is always clear here and campaign is opened by Allied turn. Pavel didn’t change much in his opening and attacked advanced French positions. This time only 2 of 3 attacks had positive attacker surprise, so French cavalry lived to fight another day. Check the aggressive Commandos landings – in the most northern allowed hex. Though one company was scattered during the landing, and two companies survived to cut the supply line between Beirut and Sidon. Is was essential for me to release one armored car Bn from the restricted stack to push the Commandos and also eat tokens from map to be in supply.

I made some adventurous decision in Tyre, leaving Supply Dump and tank Bn there. I had a chance to survive there only if my cavalry stand fast in the pass. But British got their 5 columns surprise and situation became dangerous, leaving to precious Bns “cut-off” in Tyre. I used the quotation not by chance. Sharp OCS player will easily find the hex that gave me the route to escape – thanks to the MMP designers, that Pavel didn’t find it. So the tank Bn managed to escape to the rear and an infantry Bn sealed the road for the British and ate the token from Tyre due to absence of ZOC in Move Mode. That was a tough lesson!

On the Damascus flank I tried to repeat my deeds from the last game and save as much supply as possible through the railroad. I won the initiative on the second turn, but gave it up. Potentially, I had an opportunity to launch the infantry battalion to Haifa via Reserve marker in the exploitation phase and kill some trucks there, but that lesson remaind untaught (as my opponent could quit the game), so I just stayed on the road to make some interference. So Pavel began to garrison all HQs and Dumps, and he also built a solit front on his eastern flank in the best traditions of the Great War. What can I do against such a front? I will skip the boring turns from there. On his 3rd turn, Pavel carefully approaches the places of the future battles. On the fifth turn, the units at last came into motion. Allies unhurriedly moved their right Syrian flank and also added some density in the central ridge area. French mechanized units jumped out from the central hill towards the British supply dump, defended by famous “Palmach”. The first obstacle on the way of improvised Kampfgruppe was Inf Bn on the clear, that was immediately disintegrated. The main attack was conducted 3:1 in very close terrain thanks to +1 positive surprise. Unfortunately, it completely failed with AL101 result. The 6th turn became the bloody one. Inspite of failed attack I had an opportunity to make some damage if initiative became mine. But as it often happens (in 50% cases!), your opponent rolls higher than you. So it’s Allies time to encircle my broken through units. Free French on the right continued to advance without any hurry, keeping the frontline. In the center, Allies gathered almost all the artillery, so it was possible to them to shoot with 25 strength. Fierce battle resulted 2 British losses against 1 French. As the 7th turn has come, we passed one third of the whole campaign. British move first again. The “firebrigade” that fixed the French breakthrough was relocated to the central sector. Free French are still on the march to Damascus. To make my opponent nervous, I decided to harass his Free French forces. It costed me a lot of precious tokens, but two Allied battalions were destroyed, so the FF stalled there in the fear of destruction once more. On the 9th turn British decided that they’ve got enough forces and supply for the offensive in the central sector. The assault on the first victory point village was successful! They’ve setup a preliminary DG, gathered 6:1 ratio and stroke with a magnificent 6 column positive surprise. The defending stack ceased to exist. As the only French replacements source is reconstitution, it always very painful to lose so much forces. French thrown almost all the reserves to the central ridge, as breakthrough was very possible there. On the 10th turn, British attacked in the center again. Another 2 Vichy Bn were killed, despite the fact that they were defended in the very close terrain. What’s left to secure the Rayak? But British fell to the positional dead end till the 13th turn. Center was stalled due to excellent work of French air and artillery units. Allies tried to move the offensive vector to the adjacent direction but without and success. French got some time and some battalions to reinforce the endangered sector. On the milestone of two thirds of the campaign (14th turn), Allies attacked on the three directions: one sudden strike on the coast without preliminary artillery fire and two attacks on the fork between the central ridge and Damascus plain. All three attacks got positive surprises with 5-6-6 columns and destroyed 6 French Bns. What’s left for me is to rethink the french defensive lines. There’s only one river left on the coast between the Allied forces and Beirut. Another attack in the center on Allied 15th turn, two more battalions destroyed. On the 17th turn, Free French made a very aggressive jump to make contact with Vichy defenses. Another surprise on the 18th turn and Allies crossed the river that guarded Damascus. It is impossible for French to defend Damascus itself, as it is an open city for them, so they are halved in the Damascus hexes and defends on the open terrain string. The only way to prevent the penetration was Vichy counter maneuovre to cut off two British advanced Bns. British tried to relieve the encircled battalions on their 19th turn. The attack ratios was 2:1 and 1:1 in Close and Very Close. No surprises this time, so both attacks dies with ALo1Do1 and AL1o1 results, but supply line was temporarily restored. So close and so far! Vichy counterattack kills the only Bn that secured the FF fragile supply line. DL1o1, so it’s French tanks time to roll out towards the lonely FF HQ. The Allied right flank is under the threat of collapse. British dragged 3 units from the cup on their 20th turn (they lost 9 units during the previous turn). Reconstituted forces and the fresh brigade rushed to save the right flank and the coast. They even forced the river in two places. Vichy regrouped near Damascus on their 20th turn. There is no supply left to exploit the success. Cavalry unit ran to the lonely token to eat some food during the Supply Phase. It’s good position to secure the automatic victory on that flank. The last turn of the campaign! British won the initiative and will desperately struggle for the victory points. There are no forces to attack in the east. Coast offensive broken down on an impregnable wall of water obstacle. The only success was in the center with another 6-column surprise.

We decided not to play the 21st Vichy turn, as it would not change anything. You can see all the VPs on the map in the end of the game. Allies left with 5 VP which means a crushing Vichy victory. I’d like to note that in case of Damascus capture (that was very close) it would be a draw. And if Allies would also capture Damour (one hex away on the coast) they would win the game. I think that the victory conditions are very tough for the French.

That’s all! I hope you were please to read the AAR as I was pleased to play the game and describe it.