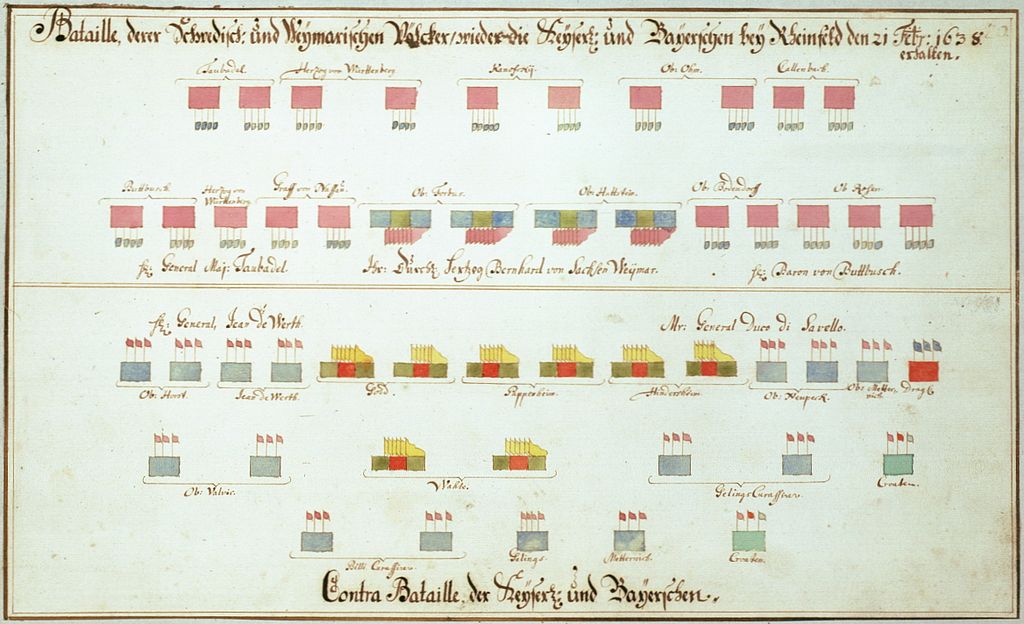 Recently we transferred to the 1638, just to watch the ascending of Weimar (3 turns Rheinfelden scenario).

Here Bernhard fights for protestant’s cause against the Bavarians and Empire troops (yellow tokens shows economic regions for Weimars, blue – for Bavarians). Historically, Bernhard besieged the Rheinfelden (1), to cross the Rhine and open the Breisach crossing (2) for the French. He lost the battle to de Werth (3), but quickly recovered, took his revenge, captured de Werth and besieged Breisach. We had different flow of history. Catholics plan: unhurriedly forage with de Werth towards the Palatinate, while Empire Column burns everything in the north. The plan was cruely interrupted by Surprise Attack card played to capture the Strasbourg on the second game round (thanks, there weren’t enough infantry steps to instantly capture Breisach).

De Werth had to accelerate towards Strasbourg, inviting Bavarian garrisons to his army. At the beginning of the second month, Strasbourg was retaken and Weimars retreated to Wurttemberg. Catholics made a strategic mistake by sending de Werth to clear the Alsace and letting Bernhard to approach the Bavaria (with taking a lot of foraging VP in Wurttemberg). Lucky roll on Ulm surrender, another “Surprise” on Augsburg gave the Weimar first hand in terms of VP and de Werth forced to return home. Ulm was taken back, but scenario end is near and Weimars guard Augsburg with Tactical Advantage and fully recovered army after reinforcements. De Werth is reluctant to impose the Major Battle (the first and the only battle that happend in our game). The battle is quite a lottery in Won by the Sword, so it often happens as a desperate measure.

The forces are approximately equal, but Bernhard had little more luck in rolls. Weimars victory.

My fellow wargamer expressed an interesting interpretaion of the outcome which diverges from scenario VP result: “However, Rhine is not opened. French forces still separated from the Bernhard by water barrier. So it seems, that Bernhard complicated his position strategically. Bavarian and Empire reserves are closer. Empire column covers the Rhine crossings. As catholics survived the Augsburg battle, they still considered a threat”.