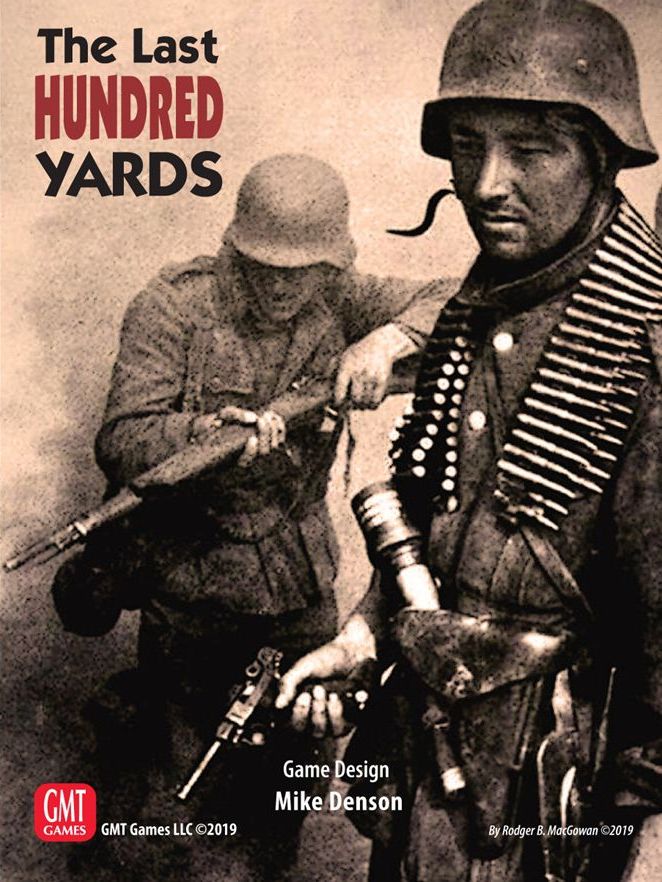 It is very brave and inspiring decision to create a new WWII squad-level tactical wargame while having Combat Commander, ASL and Band of Brothers on the market. Mike Denson dared to try applying all of his vast wargaming experience and succeeded in creating of the new deep tactical system. I was very enthusiastic to participate in playtesting with my friend Igor couple of years ago and glad that game was thoroughly developed and published with such high quality. Just compare everything we’ve got in the box with the retail price of the game! GMT Games are very generous!

The game box includes 6 double-sided geomorphic maps, 4 mission cards with 12 scenarios, 5 counter sheets, 4 ten-sided dice with “10” instead of “0”, a lot of player aids, rulebook and playbook with rules demonstration and extended example of play.

The game has very innovative and “different” feel. It’s obvious that the designer Mike Denson played a lot of different tactical wargames, and tried to synthesize all the good ideas that he met before with his own innovative ideas, that he never saw in previous systems. In this article I’d like to talk about the things that makes THLY to stand out of the crowd. The things that made the game an alternative view on the WWII small unit actions in its own right. Let’s dive deeper into the game system!

The game flow may seem a bit unusual. At the start of game turn, both players roll a die to determine the initiative. High roller wins and becomes an active player, while the low roller is non-active (or reactive) one. The counter-intuitive thing lies behind the fact, that during the whole turn only active player activates his platoons and can operate all his units as he sees fit, while the non-active player could only restrictively react to enemy actions that occured just before the call for reaction. It means that if enemy unit in LOS didn’t perform some action like fire or movement, or didn’t perform any actions in LOS at all, reacting units has very limited set of options. So it’s possible that defending player will always win the initiative and the attacking player will bog, that’s why attacker usually has bonus modifier.

The game forces are organized according to Table of Organization (TOE). So generally you control company or two, which can be reinforced or not. Each company is divided into platoons. Game activations are performed on platoon basis. So if in other games like Combat Commander or ASL you combine you squads into platoons arbitrary (or you may control them even as separate squads), The Last Hundred Yards stimulate player to think in terms of platoon level combat tasks.

You will not find the movement allowance (MA) on the counters, because every type of unit (infantry, AFV, truck) has fixed MA based on its current role (active or non-active). For example, any active infantry units may maneuver using 3 movement points (MP) or 2 hexes on player’s choice, while non-active infantry unit may move in reaction using 2 MP or 1 hex.

There are three kind of fire attacks: small arms, anti-tank and mortar fire. And mortar fire got special treatment from Mike Denson, so even Dean Essig praised the implementation. Mortar fire hinders the LOS and causes very effective impact on the battlefield.

The game uses very interesting level contours concept: where every hex is not binary estimated as hill or not, but could be a part of several level contours, which affect line of sight. Also, special table helps to determine the blind hexes, based on the distance and level difference between the highest hex and blocking terrain.

As we can judge from the name of the game, The Last Hundred Yards has the same name as the famous manual on small unit tactics. What first comes to mind when we hear “the last hundred yards”? For me, it’s a final distance of the attack – the assault. And assault has very detailed and deep rules in the game. Assault should be declared during the activation phase. It can be declared from 1 or 2 hex (100 yards) from the target, and assaulting unit should survive all the incoming fire. Assault resolved on the separate table with magnifical list of possible modifiers. And at the conclusion of assault, all units (not destroyed or disrupted) become disordered and need to regroup.

The last thing I wanted to mention is how seamlessly all these game components integrated with the smart mission design. Every mission is the combat task for a company, like taking the hill, clearing the village, securing the crossroads, etc. At the end of every game turn you roll the dice to determine how much time is lapsed (in minutes). The mission card specifies the number of minutes available to the attacker for accomplishing his mission, so one can not infinitely prepare the attack, because time is running out every turn (2-5 minutes may pass per turn). The mission also specify the casualy differential limit. If one side destroys more enemy units than suffers own casualties according this differential, the side wins the game.

In the end, I’d like to repeat the statement I mentioned in the beginning: The Last Hundred Yards is very innovative game and it gives to the seasoned tactical gamer very different feel and angle of view on the small units action. If you are fan of the Combat Commander, ASL or Band of Brothers, I highly recommend to try this game!

One thought on “The Last Hundred Yards”